The parallel-timeline St. Louis Hawks will select a white guy with cool shorts, according to the latest 2011 NBA Mock Drafts.

The first 2011 NBA Mock Drafts of the season are coming out, and with their pick I'm told the St. Louis Hawks, caught permanently in 1955 after a terrible time-travel accident that left Bob Pettit convinced he was Napoleon and Napoleon convinced that Bob Pettit was totally underrated, will be selecting a white guy with an awesome crew-cut.

The white guy will be wearing cool shorts, said St. Louis Hawks general manager and powering-forward "Brick" Runspeed, and his crew-cut will be the kind of crew-cut you get when you're really good with a straight razor, like good enough to be dangerous, but you never really let anybody know you know you're cool. 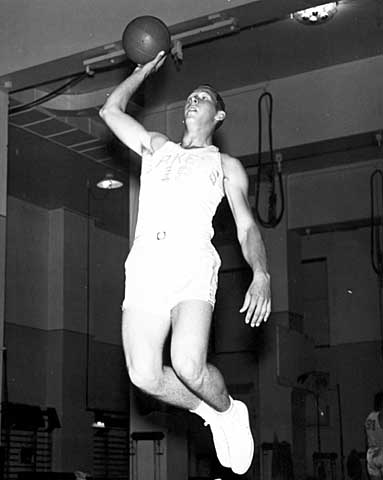 He'll say "shoot baskets" instead of play hoops, confirmed Hawks beat writer Scoop "Scoop" McGillicuddy, and he knows a number of good Polish jokes, which he only tells around other men with crew-cuts. [AT RIGHT—the white guy demonstrates improper lay-up form at a day-camp for at-risk basketball players.]

Some worry that the white guy is too concerned with fundamental play, but when reached for comment on the family driveway, where he learned to shoot in what he calls a "two-handed set-shot" fashion, the white guy issued an on-the-spot jaw-session, because he's not the kind of guy who issues a statement:

"Shucks, Scoop—I can call you Scoop, right? Scoop, I'm just interested in playing basketball the right way. It's not about all the slamming dunks and the 'under-the-thigh' dribble; it's about passing, sometimes with a bounce and sometimes without—it's about making your penalty shots—it's about holding the ball once you've got a one point lead until the game ends, so that you don't turn it over."

Other 2011 NBA Mock Draft suggestions for the Hawks' pick in the parallel time-verse draft include a flashy white guy from New York who looks one way and throws it another; a six-foot-flat white guy with a "jump" shot; and a very tall white guy who stands underneath the basket and "tends goal", as it were, by pushing the basketball through the net when it's about to go through.

When reached for comment, Josh Smith of the Atlanta Hawks of this timeline sighed audibly and told reporters, "This—this is why the theory of the multiverse infuriates me. It's tantamount, I daresay, to some—some cosmic breach of the right of privacy. I can only hope—and I can ask only for your hope, as well—that the actions of these lost St. Louis Hawks don't lead to unintentional calamity for we Atlantans."