There is nothing as American as baseball. But if there was, it'd be someone playing a guitar painted like an American flag, wearing jean shorts with no shirt, on an aircraft carrier, while Lex Luger bodyslams Yokozuna. But why can't the most American thing ever be both baseball and topless guitar music?

It can be! Take former St. Louis Cardinals closer Ryan Franklin's career arc with the Cardinals. It perfectly matches up with the life of a young man's relationship with the most 'Merican music collection of all time: FREEDOM ROCK.

Let us say that you found your dad's old Freedom Rock tapes while going through stuff your parents were putting out for the big neighborhood garage sale in seventh grade and kept them. "Ramblin' Man" was cool, but there was some lame stuff on there ("'In The Year 2525'? more like 'In The Year BORING' am I right?"). It wasn't your go-to album (looking at you, Pearl Jam's Ten!) but it did its job. This was Ryan Franklin's 2007.

Entering high school, you still really like Pearl Jam, but after Vs, they release Vitalogy and that flat out sucked. You start smoking a little pot and listening to Freedom Rock again. "A Horse With No Name" starts making sense. Also known as: Ryan Franklin's 2008.

Going into college, you start getting into some new bands. The Strokes come out strong, but fail to keep delivering the hits. One night, your fraternity brothers are going through your desk, looking for zig zags, when they see your copy of Freedom Rock. It's kitschy, but you throw tape 1, side B into the stereo and "Smoke on the Water" starts. You guys jam out all night (even like a bunch of weirdo commies to The Guess Who's "Share The Land") and Freedom Rock becomes a staple to close the parties with the rest of the year. And that was Ryan Franklin's 2009.

(The Strokes were Jason Motte.)

You graduate college and moved into your first crappy apartment. You quit smoking weed, but still knew how to rock ass on the weekends (and sometimes weeknights). You most definitely know that a party doesn't end until you're all out of beer and jager, and Freedom Rock has played from start to finish. Truthfully, though, the joke isn't as funny as it used to be and it's kind of sad, in a way. Ryan Franklin's 2010, everyone!

Congratulations on your engagement! You and your fiancee are moving into a pretty nice place. Packing up, you see your old Freedom Rock tapes. One is held together with masking tape. Not looking too hot. You give it a couple trys, but it just isn't working anymore. You throw it in the box you're packing anyway, then put on your iod to listen to some Fleet Foxes and Mumford and Sons. You still keep the tapes at your new house, for some reason, even though you don't have a tape player anymore. A few months later, your fiancee throws the tapes out after tripping over them and breaking her wrist. And just like that your love affair with Freedom Rock has come to a close. Sorry, 2011 Ryan Franklin.

(Fleet Foxes is Eduardo Sanchez. Fernando Salas is Mumford and Sons. And, just for fun, Mitchell Boggs is Bon Iver.) 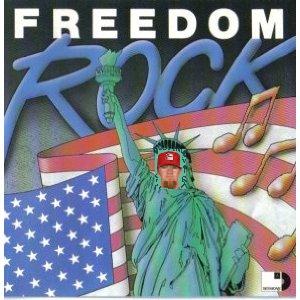 In 24 years, only the lexicons have changed. The spirit still remains: We, as Americans, love guitars and fireworks, but we hate crappy relief pitchers.

(Note: Freedom Rock sure had a lot of British people on it. What the shit?)