Have you ever thought Daniel Descalso looks like a World War Two vet? If you did, you have a very keen eye.

Share All sharing options for: The Curious Case of Corporal Daniel Descalso, USMC

Daniel William Descalso was born on a farm outside of Spencer, Indiana in the winter of 1922. The son of an Italian immigrant, Descalso's family was well off for the area, and owned the first automobile in Owen County. Daniel attended school and enjoyed playing baseball in the summer when he was not busy detasselin' corn. In April of '37, his father, Duilio Descalso, suffered a stroke and passed away a few weeks later.
After Duilio's death, it was learned that he had been running numbers for a large crime syndicate out of Indianapolis and owed the IRS most of his fortune. The Terre Haute Savings & Loan seized the farm the following October. Daniel took his mother and two young siblings west, finding work at a tool & die outside of Coal Camp, Missouri. 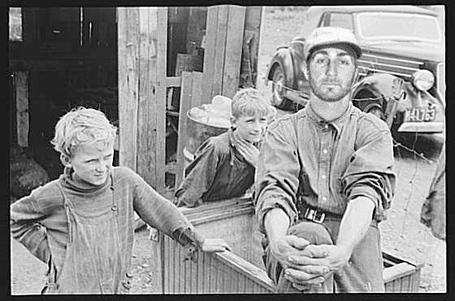 (They didn't have chairs back then. "We have boxes for a sittin'!" was a common phrase.)

On the weekends, young Daniel played in the village baseball competitions, catching the eye of Cardinals scout Branch Rickey. Descalso signed with the Cardinals in 1940 for a $300 bonus and made his first big league appearance in 1941, at the young age of 19. 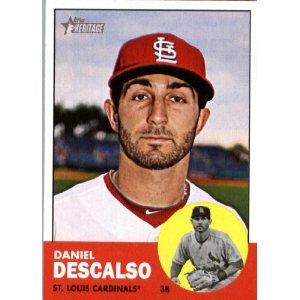 The slick fielding infielder had a great love for the game of baseball, eclipsed only by his love of country.
On December 8th, 1941, he enlisted in the Marine Corps.
He served honorably in the battle of Guadalcanal and was promoted to Corporal. He was awarded the Navy Cross after the battle of Saipan, where he saved the life of Lieutenant General Holland Smith. Cpl. Descalso returned home to Missouri late in 1944, on a two week leave.
While on leave he met Abilene Jenkins, the daughter of a prominent steamboat captain, on a night out in the village of Tipton. Daniel and Abilene quickly fell in love, making plans to marry after the war, much to the chagrin of Steamboat Captain Jenkins. 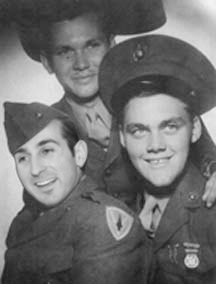 (Cpl Descalso, along with LCpl Bill Connelly and PFC Ed Samcoff during one beer soaked night of libo outside of Camp Pendelton, 1944.)

On February 21, 1945, during the early stages of the battle for Iwo Jima, Corporal Descalso was supervising an ammunition resupply aboard the USS Saratoga. The mighty ship was hit by Japanese air-fire, fatally, and as she sunk to the ocean floor she took 123 men with her.
Corporal Daniel Descalso's body was not recovered. 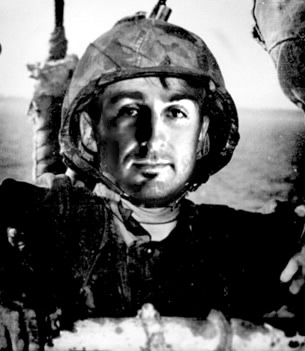 Descalso found himself washed ashore on a tiny strip of land approximately 25 miles southeast of Minami-Iwo Island on February 28th, 1945. He had drifted, both in the sea and in-and-out of conscious, for a week. Descalso learned he was alone, except for a community of colobine monkeys. He established shelters and taught himself spear fishing. The arm that had made him a major league baseball player now kept him alive.
He built fires to draw the attention of passing ships. Ships which never came. He spelled out messages in the sand with rocks, hoping to catch the eye of an attentive bombardier flying overhead. Those flights grew less and less, eventually ending in August of '45. He thought of Abilene. 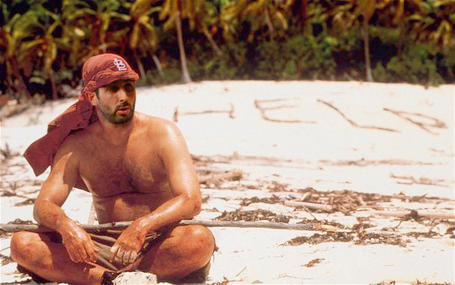 (Don't ask how I got a picture if it was a deserted island, please.)

As the years dragged on, between thoughts of suicide and the elaborate monkey fighting league he organized, Descalso began to notice something.
He wasn't aging.
Sixty five years after arriving on the island, Descalso, still fit as ever, noticed a large yacht approaching what Daniel had come to name "Isola Infinito". Charles Widmore, a wealthy British industrialist, motored his life raft ashore.
"I saw the smoke from your fire," Widmore said. "This island... I have found what I was looking for! How can I ever repay you?"
"Take me home," Descalso simply replied.
He returned to a different world than the one he left. There was only one constant from his former life: Baseball. Still under contract with the Cardinals (those olde timey contracts weren't very player friendly), Descalso established himself as a prominent utility player under managers Tony La Russa and Mike Matheny.
He is, most of all, gritty.

Daniel Descalso, born to Italian immigrants in 1922, decorated combat hero, long thought dead, will bat 7th and play second base tonight for the Saint Louis Cardinals in Game Five of the 2012 NLDS. 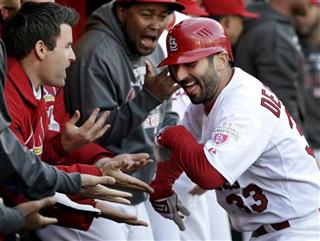