Rams vs. Patriots: Sam Bradford is Benedict Cumberbatch (and other London bridges)

Share All sharing options for: Rams vs. Patriots: Sam Bradford is Benedict Cumberbatch (and other London bridges)

Will of RamsHerd has done a remarkable public service for London and St. Louis Rams fans everywhere ahead of Week 8's visit to Wembley Stadium—we've all worried about the New England Patriots becoming the de facto home team of his matchup, but he did something about it, ensuring the Rams' England hegemony by drawing a comparison between Sam Bradford and dreamy reboot-Sherlock-Holmes Benedict Cumberbatch. 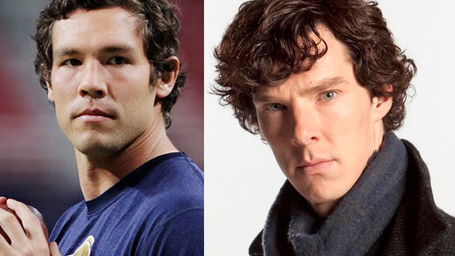 The Rams have responded to the news by offering to draft Bradford's older, more lethargic, even stronger-armed but ultimately idle brother, Jeff George.

Obviously Danny Amendola is Bradford's less-smoldering, less-guy-from-The-Office Watson, but I'm going to insist that you click through to RamsHerd for the rest. The Patriots may have Tom Brady, and a decade of uninterrupted success, and literally the only name recognition any American football players and teams have outside of the United States, but we have a series of analogies drawn between our complementary players and British pop culture figures.

And nobody can take that away from us, not even Bill Belichick. Even if rumor has it the Rams are thinking about trading Idris Elba for a BBC America TV star to be named later, and even though Gordon Ramsay has no chance of ever returning the Rams' sidelines.