Tyrell Jenkins, one of the St. Louis Cardinals' top pitching prospects going into the 2011 season, fell out of the prospect picture a little after shoulder soreness ended his season early. How best to get himself back into the public consciousness? There's one obvious answer: Footie pajamas. Take a good, long look at Jenkins's Twitter avatar, which has gone national thanks to a tweet from ür-prospect-watcher Keith Law. Jenkins offered this tweet in response to Law's insistence that he was at a loss to describe what he'd just seen:

@keithlaw Had to switch it up! Lol

Switch it up is exactly what he did. I was pretty sad about Jenkins's shoulder problems already, but now I'm going to be completely inconsolable if he fails to make the major leagues. Oscar Taveras may be the best outfield prospect in baseball, and Shelby Miller and Carlos Martinez might be closer to the major leagues, but I defy you to show me pictures of any of them in enormous footie pajamas, trying to look cool.

I'll leave it to Future Redbirds to determine the implications of this for Jenkins as a prospect, but as a layman, at least, I'm pretty sure this pushes him back into the Top 5. Here it is again, in case you were unable to see the footies in the first shot. God bless America. 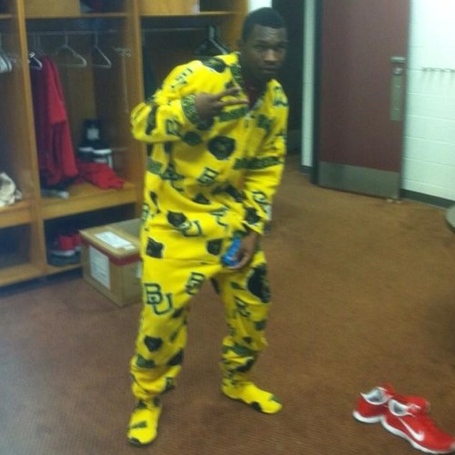