Sunday marked the end of 377 days without a road win for the St. Louis Rams. A streak that would be even more bloated, if it weren't for the Browns being unable to kick a two-inch field goal. (AKA, the play that gave Andrew Luck to Indy.)

If we're making a check list, Jeff Fisher's Rams are marking off some pretty significant boxes:

Establish a deep threat for Bradford (Chris Givens, with six catches and 115 yards, with most productive game yet) - CHECK.

Good. All of it good.

The Rams are on pace for six wins (and a tie) and that's a hell of an improvement from 2-14 in 2011. It's hard during the week to week grind of the NFL to take a step back and assess the big picture.

Then again, after the shape the Devaney/Spagnuolo regime left the Rams in, it was virtually impossible to regress.

With five games to go, what, then, do the Rams have to accomplish?

Are we working with a superstar or do we have a bigger-handed version of Alex Smith?

8 of 17, 205 yards and 2TDs/1INT against the Cardinals. Not spectacular, but solid. And this came isn't an anomaly. Bradford has generally been a solid QB throughout his tenure with the Rams. Not bad, not great... but a guy that goes out, performs OK and sometimes makes a play.

Problem is, the Rams pay him to be THE star on this team. And he hasn't been that. For instance, will we ever get a performance from Bradford that looks like what RGIII did on Thanksgiving? Maybe a unfair comparison, since the skill sets are different. But I can't remember a game where we could all gather around Monday and just begin and end a conversation with "BRADFORD!".

You did however, do that with RGIII while eating turkey.

Next year will be year four. It's time for Fisher and Brian Schottenheimer to let it rip with Sammy B. See if he can carry this Rams team on his back. Empty the playbook and wow us.

Beating SF would be sweet. But that's a Super Bowl contender. It won't be easy, even if you think the Rams should have beaten the 49ers a couple weeks back.

The Minnesota game is the last home game of the season. The Rams will be officially eliminated from the playoffs sometime after that game, and the final two contests are on the road and in the midst of the holiday season. It's imperative the Rams leave a positive impression on the city about 2012.

No, it won't directly affect the negotiations. But the more excitement the members of the CVC in the community, the more onus they'll have to get a deal done.

The D-Line is set. They should be back and better in 2013. But the secondary, needs to be owned by Mr. Jenkins. Yes, the two pick 6's are wondrous. But it's a symptom of him playing with confidence.

He's the most talented Rams defensive player. We were all hoping against hope that he'd just make it through his first NFL season without doing something stupid.

He didn't. He was late. And he got suspended.

It appears, though, that he has learned from the tough love and is showing some of the same form he flashed early in the year. The coaches now need to phase him out of the 'learning rookie' mode and start shifting him into the leader of the secondary.

Those are the big ones. Plus, you know, figure out how to replace a Pro-Bowl running back that's basically be the alpha and omega of the franchise for the past decade.

Beating the Cardinals with something called a Ryan Lindley is one thing. But facing a 49ers D that 's working on playoff position, with a hot QB and a defense looking to atone for the shame of tying the Rams is not a good look for a win.

And is that TM really needed? Seems like an excessive expenditure to me.

Look at John. Bringing EVERYONE down.

I spent an while trying to figure this one out. And I'm not sure if it makes sense.

Let's tease this out: So this girl is popular. She's in two weddings, and since most good GFs try not to get married close to one another, you have to assume that Bride A and Bride B aren't more than acquaintances.

The guy, on the other hand, also has to be fairly popular to get invited to two weddings as well, but not as popular as the bridesmaid, since it's way easier to get a regular invite than be in the wedding party.

Now, I've never found this stereotype of bridesmaids to be all that realistic. But for this Tweeter, maybe it is. The first time he took this lady home, it was what it was. But to do it again, in the same year, easy or not, is pretty impressive. There didn't appear to be any relationship there, so maybe the Rams are really good in bed?

Is that what I'm supposed to be inferring here?

When the hot girls notice, you're doing it right. 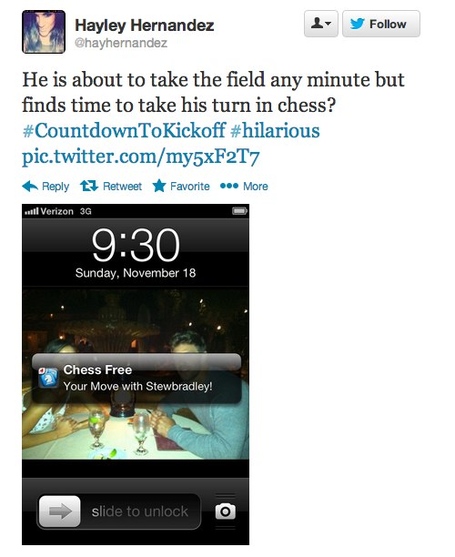 Ok, I was deep in Twitter trying to find some notable Tweets, when I came across this. Looks like last week, during the lead-up to the Cardinals loss, Stewart Bradley, the AZ Cardinals LB, had time to play Chess Free with his girlfriend.

Just a slice of life I thought you guys would enjoy. Oh, and good on these two for playing chess and working their brain muscles.

Real Meter: (Where we project the Rams win total for the year): 6