Share All sharing options for: FAT MIDDLE INFIELDERS THROUGHOUT HISTORY

From 1904 until 1960 Simmy Murch (6'2", 220 LBS) wore the title of "heaviest middle infielder in MLB history." It was a little snug around the waist, but he wore it proudly, like a fat Cardinals fan with a mesh Vince Coleman BP jersey. And then, in 1960, Pancho Herrera (6'3, 220) would tie Murch's record and also break the fat guy at middle infield color barrier.

Herrera's title would last seventeen years, when on July 1st, 1977 Pirates right fielder Dave Parker (6'5", 230) historically and bizarrely moved to second base in an extra innings game. Parker's 230 pounds was eventually tied by Cecil Fielder (6'3", 230 *WiNk WiNk*) who -- WHAT IN THE HELL IS GOING ON HERE -- played second base (TWICE) for the Blue Jays in 1988.

Taking things to the next level, both Erick Almonte and Mike Morse have checked into the middle infield at 245 pounds, though they are listed at 6'2" and 6'5", respectively, and neither had long careers at the positions.

But since 2001, 6'0", 240 pound Juan Uribe has heavily covered the middle infield (though he is at the more comfortable fat guy position of third base now, where he is terrible), making him easily the fattest every day middle infielder in Major League Baseball history. 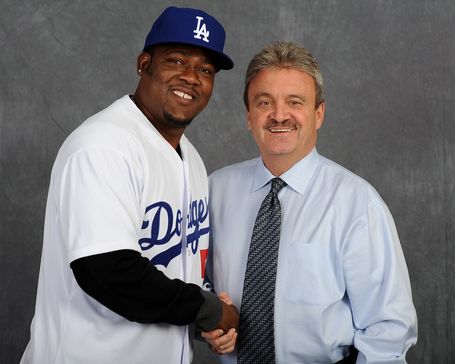