Being a St. Louis Rams fan involves a difficult balancing act, one that's not unlike the balancing act a hipster faces when attempting to enjoy "Call Me Maybe" without being forcibly ejected from the Pageant. Done correctly, being a fan of a football team is fun; but being a fan of the Rams, in 2012, requires a certain self-awareness, both to maintain others' respect and [unlike the hipster] to protect one's own sanity. So when your fantasy football draft requires you, this week, to show up among your friends in Rams garb, do the right thing: Wear a brand new jersey bearing the name of your new favorite Ram. Wear a Greg Zuerlein jersey. Sorry: A Greg Zuelein jersey. 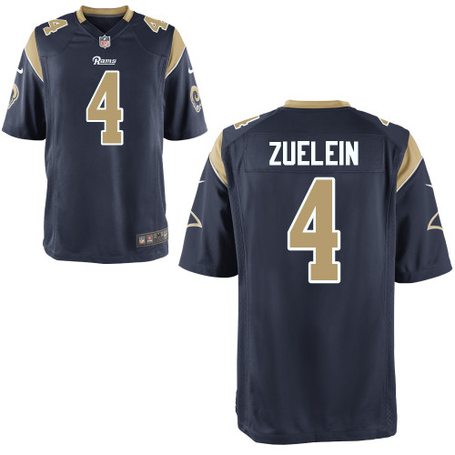 Yes, NFL.com has misspelled Greg Zuerlein's name. But they're only $149.99! The NFL's callous disregard for literally the only fun thing Rams fans have this preseason makes this jersey the perfect fantasy football icebreaker. It says, "I really am excited about the Rams' rookie kicker, on account of how awesome he appears to be, but at the same time I realize that I'm reduced to being excited about the Rams' rookie kicker." Rookie kicker Greg Zuelein.