Dwayne Evans scored 24 points on11-16 shooting Thursday as the fourth-seeded Saint Louis Billikens blew out the 13-seeded New Mexico State Aggies, 64-44, in the second round of the NCAA Tournament.

The win was the fifth straight for the Billikens, who came into the tournament as winners of the Atlantic 10 Tournament last week in Brooklyn.

With its win on Thursday, Saint Louis advanced to play Oregon on Saturday in the third round. The Ducks defeated Oklahoma State to pull off the first of two 5-12 upsets by Pac-12 teams on the day. That game time has not yet been announced. The winner will move on to Indianapolis where they would be on track to face the Louisville Cardinals in the Sweet 16.

Louisville earned its spot in the third round by dominating North Carolina A&T Thursday afternoon, while elsewhere in the Midwest region, Michigan State blew out Valparaiso. The Spartans will play Memphis next, who barely held off a relentless Saint Mary's team.

Here's a look at the updated bracket, with more second round games still left to play. 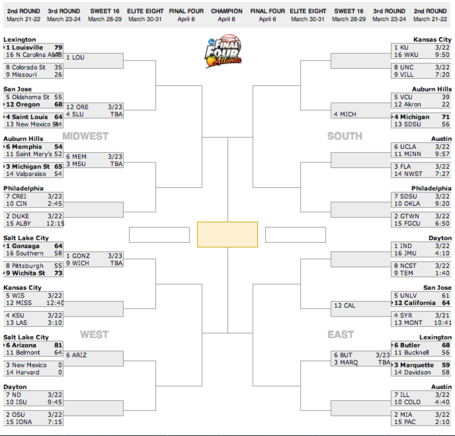