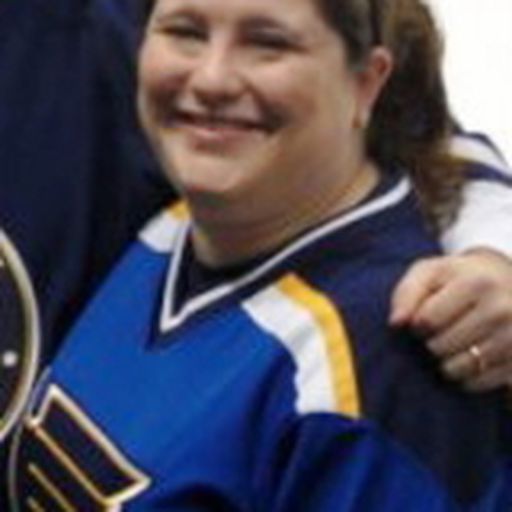 A native of St. Louis, MO, Laura has been living in Atlanta, GA since 1993. It was a hockey wasteland, and Laura - a Blues fan from age 8 - got by with newspaper clippings her family sent her about the Blues and NHL94. In 1999 the Thrashers came to town, and she was a fan from the first game through their very last. This, coupled with her love of the Blues, drug her into blogging feet first. Laura writes irreverent and occasionally insightful commentary on the St. Louis Blues (and formerly the Atlanta Thrashers) on her own blog, Thrashing the Blues. She contributed to Birdwatchers Anonymous, but more often than not can be found at her home away from home, St. Louis Game Time, where she writes the weekly(ish) feature Tuesdays With Hildy.

In some good news for the Blues, at least on a national stage, their mascot Louie has been nominated for the prestigious Most Awesome Mascot Award.

Two of the players Blues fans are most excited about seeing in the Note, Vladimir Tarasenko and Jaden Schwartz, were named to TSN's Top 30 Affiliated Prospects list.

Blues prospects Ty Rattie and Jordan Binnington will be representing Canada at the 2012 World Junior Championships.

Will Alex Pietrangelo be able to get the length deal he'd like to have under whatever contract limits the new CBA imposes? Here's hoping yes.

The Blues' captain has been a strong voice for the NHLPA during the CBA talks, and with the most recent talks breaking down, he's unhappy.

The Blues' enforcer is keeping his skills sharp with the ECHL's Orlando Solar Bears until the lockout is over.

Want to see some hockey? Of course you do.

The Illinois Office of Tourism is running a swell contest in which you can win a set of four tickets and a $50 gas card for minor league hockey.

Is Chris Pronger's career over?

Flyers defenseman Chris Pronger has moved back to St. Louis, and it appears that his career might be done.

Forbes' annual "Business of Hockey" report doesn't paint the rosiest picture for the Blues, but is it really that huge of a deal?

It's a shame it's too late to submit questions to David Backes in today's Reddit AMA, but it's never too late to read the great questions and answers from the captain himself.