The Atlanta Braves sold low on a player who was once among the top pitching prospects in baseball in this week's most interesting MLB trade.

If you haven't been following the Atlanta Braves very closely for a while now you might have been surprised by the news, on Friday, that they'd traded erstwhile twentysomething ace Tommy Hanson to the Los Angeles Angels of Anaheim Mighty Ducks of Anaheim for Jordan Walden, a very effective relief pitcher. Keith Law's evocative chat response to a similar question probably says most of what you need to know—"The inside of his shoulder looks like hamburger meat."—but it might also be worthwhile to consider this FanGraphs chart, in which his velocity trends down from mid-90s to Kyle Lohse: 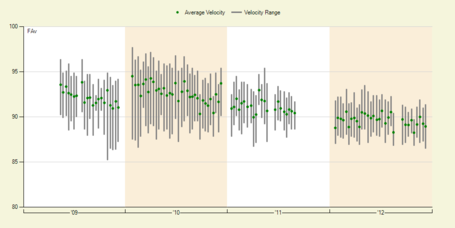 Which is enough to make most teams nervous. You'll recall, of course, that the Angels just recently dumped Dan Haren, another velocity-shedding starter with less-than-stellar physicals—apparently they're willing to take the risk, but they'd just as soon it be a cheaper one.

For the St. Louis Cardinals, of course, the cautionary tales are obvious. Hanson had a lot in common with the Cardinals' current crop of starting-pitching superprospects, and now he's somebody else's reclamation project; pitching careers can turn fast, even after major league success.

Of course, he's not exactly a worst case scenario: With the book closed on his Turner Field career the Braves got 635 innings with an ERA of 3.61 and a 45-32 record out of Hanson, good for 10 fWAR—plus the very useful Jordan Walden.That's not what you want out of a Top 5 MLB prospect, but it's pretty valuable for a draft pick.