A less-than-sold-out arena was supposed to be a reflection of St. Louis Rams fans. And it was. We're all way smarter than we thought.

Share All sharing options for: St. Louis Rams Real Talk: Vs. Vikings, a less-than-full dome sees what we should've expected

I knew that that the line to get in the dome was going to be long, so I got there early. And at roughly 12:04 central time the Minnesota Vikings kicked off to the St. Louis Rams.

Frankly I was embarrassed.

Just in case you needed proof, there is my tweet.

I pretty much had the article already written: St. Louis doesn't deserve a professional football team if we can't get a sell-out on a 60 degree December day with the playoffs hanging in the balance. All you ever ask for is a chance with 3 weeks to go.

To have what was basically an elimination game with the weather a non-factor? AWESOME.

There I was. In the stands. Questioning St. Louis as a sporting town. Ready to have the trollingest of headlines for this article...

Turns out I'm the idiot. I got trolled.

Because after not going out Friday night and taking it easy at a Christmas party on Saturday night--all so I could have a big time on Sunday--the Rams, as they always seem to do, made it tough to be a fan of this team.

They got decked on Sunday. Their faces rubbed in the turf. Laughed off the field and sent in to the top portion of the draft.

I blindly took the Rams' recent winning streak as a sign of something better. But I was wrong. Really, really wrong.

Instead you and I were treated to the Rams leaving the field at halftime down 30-7 and out of the playoffs. Another lost season. The epitaph written on a campaign that brought everyone no closer to respectability.

In a day that had Steven Jackson reach 10,000 yards in his career and Sam Bradford go for 377 yards and 3 TDs, it's still hard to find silver linings. Because when it REALLY mattered, Jackson was getting outshone by Adrian Peterson (212 yards/8.8 per carry) and Bradford was missing Danny Amendola wide open (4:33 in the 4th over the middle, effectively ending the game.)

If you need tangential proof, look no further than the referee coming on-mic multiple times to clarify that Sam Bradford was not intentionally grounding the ball. He knew what you were thinking and needed to get out ahead of it, I suppose.

No, it's over now. The Rams will go to Tampa Bay and Seattle before finding out where they draft in 2013.

People will talk about the Rams improving in 2012 and have hope for 2013. Perhaps when opening day of the season comes next fall, we'll feel better about the team.

But until further notice, this team doesn't deserve our trust. I'm embarrassed that I called out St. Louis for not coming out to make sure that the dome was packed for a playoff showdown.

The hopeless romantic that forgot the Rams, sans 1999, are the ones that specialize in one thing and one thing only...

Letting us down when we least expect it.

And then again when we don't. 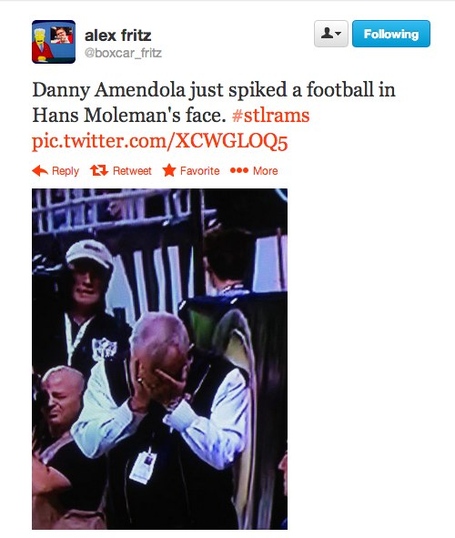 What else can go wrong for the Rams? How about spiking a TD into an elderly usher's face.

I want to end this column here. I won't, but I want to. Nothing else is more symbolic of this game.

Just kidding. Just the defense of the STL Rams. Dude just placed himself in the thick of the MVP race AND to break Rams RB Eric Dickerson's all-time single season rushing record.

He bitch-slapped the Rams back into reality. 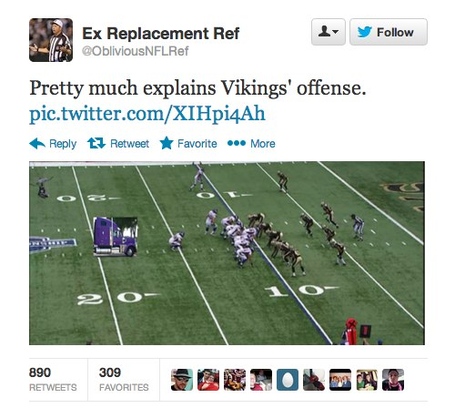 Ok. I'll stop after this one. But still, think about this. All week every single person you talked to was all "Rams got to stop A.D."

That was it. That was the conversation. The Rams had to stop A.D.

Yet here we are. The Rams gave up 200+ yards to A.D. STIIIIILLLLL less than a year removed from him blowing the heck out of his knee.

He shouldn't even be close to 100%. But he's somehow better than ever.

Love my man Bernie. Respect his opinion. And his article this week on Sam vs. RGIII was spot on... except for one point.

I respect the facts. And the stats. And rational talk. But sometimes you just have a feeling. And right now, three seasons in, Bradford FEELS like he's going to be a guy that doesn't hit his ceiling. RGIII FEELS like a guy that will exceed his.

In the biggest games of his career (Seattle in '10/ Minnesota in '12) Bradford has played well, but the teams he's led have been thumped. Someone has to be the leader of an NFL team, and it's almost always the QB. Bradford is establishing a track record of losses in the big ones. If you really want to call those 2 games big.

There's time. But we have to see to believe. Bradford squandered another chance to shift the narrative. And with a TAINT and a missed Q4 pass over the middle, he, again, hasn't.

Years from now, some kid somewhere is going to become an NFL fan. And they're going to be doing some research on the NFL and stumble upon Steven Jackson's stats and pause.

Who was this guy? Why have I never heard about him? What the hell was going on in St. Louis?

And to that kid, all I can tell you is that I have no idea. To have a 10K rusher totally blow a career with a team that had one of the hardest things to figure out figured out, but still managed to never win... it's almost impossible to do.

The Rams have done the impossible.

Real Meter: (Where we predict the Rams win total for the year): 6