Fate smiled on the Blues not once, but twice this period, as two goals nearly snuck past Brian Elliott. The fact that neither was a goal is a miracle. A slap-shot from the line by Ryan Whitney rolled inches away from the post with about a minute and a half left, and then the attempted tap in of a Shane Doan cross-crease pass by Damon Langkow with just seconds to go in the period. The horn went, the fans jumped up, and the ref promptly waived no-goal. Sorry, Phoenix horn-guy.

Jason Arnott left the ice with a cut over his left eye from a Keith Yandle high stick, which means the Blues will start the 2nd period with 3:46 of power play time. Whether or not it'll accomplish much remains to be seen.

The pre-game ceremony for Keith Tkachuk's number retirement was very well done and very classy - great job by the Phoenix organization. Walt also dropped the puck, which led to this interesting moment: 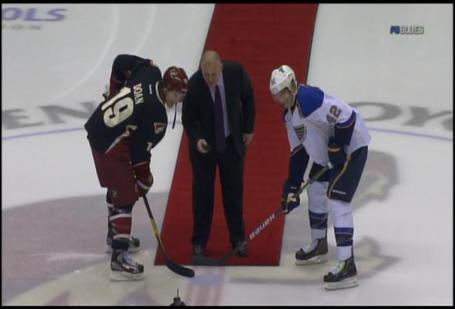 Three of the game's top power forwards, and two generations of Olympic American hockey representatives. Whether or not Backes will have the kind of career Tkachuk has had remains to be seen, but one can hope.