After the Winnipeg Jets' move north, the league needs to get them out of the Southeast Division. One simple relocation's opened a whole Pandora's Box of suggestions, good and bad. The four conference idea seems to be the best by far.

With the move of the Winnipeg Jets northward from Atlanta this summer, realignment is a necessity. It makes no sense to have them in the Southeast division with teams like the Florida Panthers, Tampa Bay Lightning, Carolina Hurricanes, and Washington Capitals. The travel's insane and the divisional alignment just looks odd, much like it looked when the Lightning were part of the old Norris Division before the new conference set-up came into play. Re-alignment and a new look for the NHL's playoffs are inevitable; it's the matter of how it's going to be done that's the issue.

One plan called for the Detroit Red Wings and the Winnipeg Jets to just flip spots. While most Blues fans (and fans of other division teams) would be perfectly all right with this, it raises issues. Detroit's obviously not in the Southeast. Columbus -- who is struggling at the gate and could use the revenue from the Penguins and other Eastern Conference teams -- has the exact same time-zone argument as Detroit. But since there was never a promise made from Bettman to the owner of a franchise that could use the help, that'll never happen. As long as Detroit winds up in the East with the big market teams and the easier competition, they're fine.

The Dallas Stars happened to suggest an idea for realignment that caught Gary Bettman's ear. It actually makes sense, to boot (via Cassie McClellan of Raw Charge; click for a larger size): 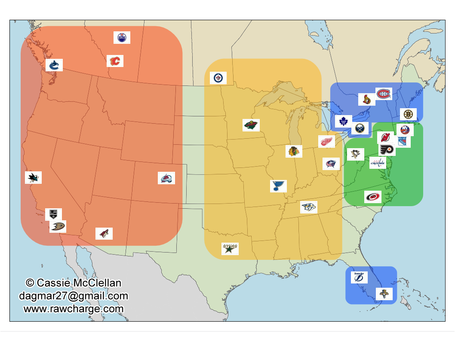 This limits time zone issues the best that they can be. Dallas is with the rest of the teams in the Central Time Zone now. Travel time's always going to be easier for Eastern Conference over Western Conference teams. They have more teams in a smaller area of land, and all of them are in the exact same time zone. This's going to happen, and the NHL's tried to remedy this by having each team have a home and home series. That way, they can all have travel, it can alleviate the "Eastern Conference Advantage" and it brings big draw teams like the Red Wings, Blackhawks, and Penguins to arenas that not only don't see them too much but could benefit from the increased ticket sales. Finally, there's no obvious preference to one team over others. Having four conferences instead of the two evens stuff out.

The biggest perk about this set up is not just the rivalries on the map, but it's the fact that those rivalries will be meeting in the playoffs for the first two rounds. The top four teams from each conference'll be facing off to start the playoffs. Do you remember things like this:

Yeah. Good times. Blues and Blackhawks playoff series were always epic battles, as were Blues and Red Wings series were also pretty hard core stuff. Those teams don't meet nearly enough anymore for many folks' tastes. Now they will. What makes rivalries fun and tough? When the teams're playing for something as huge as the Stanley Cup. The regular season games against these two teams are pretty toughly contended, but imagine the playoff series now.

Rivalries are kept together, the two teams with Minnesota roots will be in the same conference, the Western Canadian teams are kept together in their rivalries and the Eastern Conference hatred'll be stronger. It's rare when Gary Bettman has an idea that can be accepted by the league's teams and fans alike, but this one might fly. The Board of Governors will be discussing the realignment Monday and Tuesday. Will it fly? Who knows. Should it? If teams want to pull in bank at the turnstiles, there's no reason for it not to.