Share All sharing options for: Free Agency Preview: Forwards To Fill Open Positions For The Blues

It's not a secret that the Blues need some help at forward. With David Perron's availability for the beginning of this season questionable, and the re-signing of Matt D'Agostini before the deadline unlikely, the Blues need a top six forward. They also need a bruiser, and a couple of bottom six guys for depth and to provide a solid, blue-collar checking line that's become this team's trademark.

When looking at the Blues' roster, it becomes apparent that they need a bit of help: 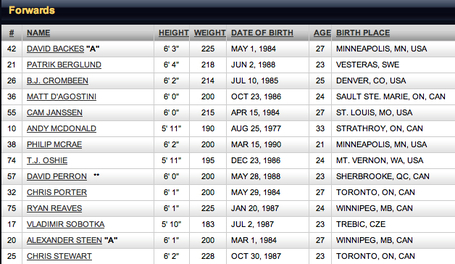 Janssen's probably gone. Ryan Reaves hasn't been signed to a contract yet, and could face arbitration. D'Agostini hasn't even been given a qualifying offer. Philip McRae looked good, but he's still a kid, and needs to stay in Peoria barring injury. Chris Porter also needs to stay in Peoria, though if you want to plunk him on a 4th line that's serviceable as well.

Everyone else on that list aside from Reaves, Porter, McRae, and Janssen are capable of top nine time. That means that there are nine (ten if you count D'Agostini) guys for the top nine. We're going to be hopeful and pretend that Perron will be playing next year. We'll also assume that Crombeen will be going fourth line.

If Porter stays up, and Reaves is signed, there's your fourth line. All things considered, then, the Blues need a third liner and a top six forward. Two if Perron's still out, and maybe another one if D'Agostini doesn't get re-signed. Frankly, if you want to put Crombeen on the 3rd line, where he plays just fine, the Blues could make room for a 4th liner as well.

If the Blues want a bruiser with some hockey sense, they could go for Eric Boulton. Boulton, who has spent the past six seasons with Atlanta, is not expected to follow the Thrashers to Winnipeg. He usually has a +/- within just a few points of even either way on a team that allowed a LOT of goals. He averages between seven and a half to ten minutes a night (which would be double Cam Janssen), and also recently won the Puck Daddy fight of the year for this brawl?

If you want veteran leadership, there's always Jason Arnott. Unfortunately, there's also his salary, which last year was around $4.5 million. Eric Cole, formerly of the Carolina Hurricanes, could also work on a second line in a pinch, with his 26 goals and 26 assists. That could replace D'Agostini's loss if he doesn't re-sign. If D'Agostini does re-sign, then Cole would be a nice compliment.

Eric Belanger's a reasonable cap hit ($1.7 million last season) for a more than competent player who had 13 goals and 27 assists for career highs last season with the Phoenix Coyotes. The Blues need penalty kill help, and Belanger could do the trick there. Also helpful, though a long-shot, is face-off quarterback Marty Reasoner. Drafted by the Blues 14th overall in 1996, Reasoner had 14 goals and 18 assists, along with a 54.5% even strength face-off percentage. There's a reason that the Panthers had the sixth overall penalty kill in the league, and Reasoner had a good bit to do with it.

Top six wise, the most reasonable option for the Blues might be Scottie Upshall. He made $1.5 million last year with the Blue Jackets. He managed 22 goals and 12 assists between Phoenix and Columbus last season, and would be moderately good insurance in case David Perron does not start the season with the team.

As usual, Blues fans, temper your expectations. The team doesn't have the money to throw huge contracts around, and while they're $20 million under the cap limit, there's no way that they ever spend that much.