David And Kelly Backes Cement The Blues' Reputation As The NHL's ASPCA.

Share All sharing options for: David And Kelly Backes Cement The Blues' Reputation As The NHL's ASPCA.

Ok, honestly, I have no idea if the Blues really have that reputation or not, but the team seems to center its charity work around animal rescue and home-finding more than any team that I've noticed. They have David's Dogs and Kelly's Kats, as well as Barret's Buddies. Both charities work with local animal shelters and stray rescue operations to find great pets homes in the metro St. Louis area. They also team up for the annual Barkin' for the Blues charity event, to raise money for Stray Rescue of St. Louis and the St. Charles Humane Society.

Before Thanksgiving, Barret Jackman and Alex Steen visited abandoned homes, rescuing pets that had been left behind by their owners (and I use that term very, very loosely). The rescue effort led to quite possibly the best photograph on the Blues' official site ever: Alex Steen with a puppy: 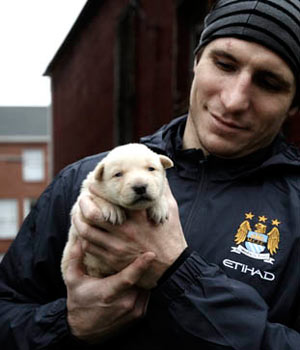 Ok, Backes and his wife Kelly did rescue a boxer and her twelve puppies. Backes and Jackman were also active in support of anti-puppy mill laws in Missouri. Would you like to know why I don't patronize Petland? Here you go:

Recently, Mrs. Backes has been doing charity work for some of the forgotten potential family members out there - the senior dogs. People are hesitant to adopt them because of that old adage "old dogs can't learn new tricks." People are also hesitant to adopt because they don't want to get attached to a dog and then watch it become sick or infirm in its old age. The St. Louis Senior Dog Project aims to find homes for these dogs, and Kelly and David Backes have been vocal in getting the word out about this cause.