Blues Hockey And Soccer: A Match Made In St. Louis Heaven

Share All sharing options for: Blues Hockey And Soccer: A Match Made In St. Louis Heaven

There's no denying soccer's kind of a big deal in STL. Blues hockey? Absolutely - the team has 41 sell outs from last season to show it. What if you combined the two? Heck, what if you just combined hockey and soccer attire in general? What do you get? Awesomeness.

Matt Pratt, the hockey editor for reddit.com, let boredom get the best of him with outstanding results. All thirty teams are represented in his hockey/soccer mashups. This is St. Louis': 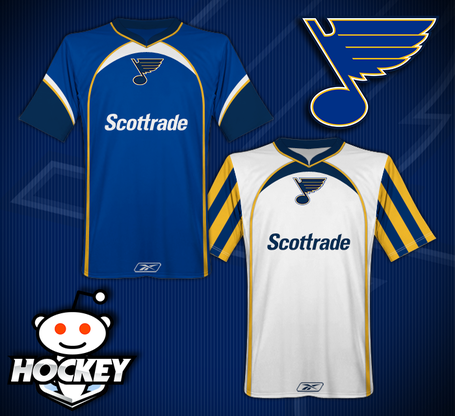 What do you think, Blues Fans? Pass or fail? I'm disappointed that he didn't incorporate any aspects of the 3rd jersey into either of them, and the RBK piping looks a bit off. Some of his other jerseys (like Florida's, which I am in love with) are better realized.