The St. Louis Blues hope to build their win streak to 6 wins against a Chicago Blackhawks team that has won 4 of their last 5 games.

St. Louis boasts the league's best points per game rate, .693, which has come largely on the merit of their defense. Despite playing 70 games (second most in the NHL), the Blues have allowed a league-fewest 135 goals this season: 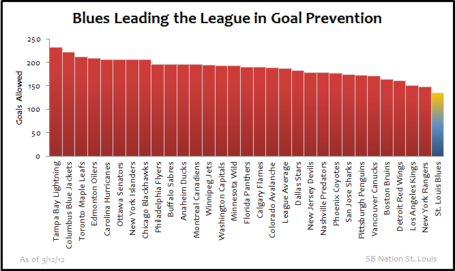 Tune in to today's game to see if the Blues can keep their success going.

Stay tuned to SB Nation St. Louis for more information, and for in-depth analysis on the Chicago Blackhawks, be sure to visit Second City Hockey. For more Blues hockey news and information, check out St. Louis Game Time.