I've written a few preview pieces so far for this series, so a big in-depth preview for game numero uno might not be necessary. What is necessary, however, is this photo making a special guest appearance: 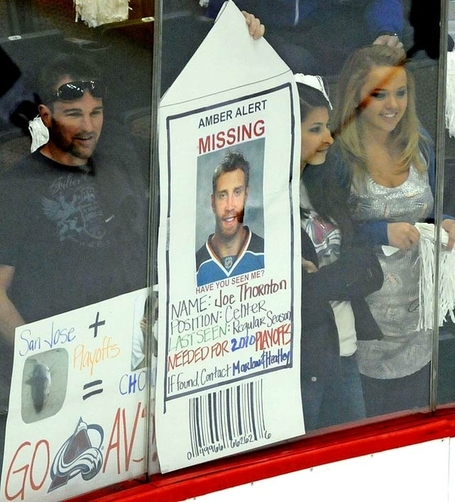 Of course, you can point and laugh at Joe Thornton, but he had 77 points on the season to lead the San Jose Sharks. Sure, the season was a disappointing one by Sharks' standards, and they've long been known as playoff chokers, but they're dangerous and they're playoff tested -- and they're the exact example of why you never count a team out for its shortcomings before the playoffs begin.

The Blues, however, are an example of why you never count a team out before the season begins. Can they win their first playoff game since before the lockout tonight? With the best home record in the NHL and goaltender Jaroslav Halak in net tonight, chances are good that they will.

If you can't watch the game tonight (and if I can't, I very much pity you), feel free to check in here after every period for a recap and some analysis. Puck drop is at 7:30, and the game is airing on CNBC for those of you who will be able to watch, but won't be able to make it.

For all news and information regarding the St. Louis Blues, please visit St. Louis Game Time. For updates and perspective on the San Jose Sharks, head on over to Fear the Fin. For complete coverage of the 2012 Stanley Cup playoffs, stay tuned to SB Nation's dedicated NHL hub.