It's time for our pretend weekly power rankings, showing who is up and who is down on the Saint Louis sports scene.

I am, admittedly, not a hockey fan. I loved going to Riverman games growing up in Peoria, but that only further cemented my belief that hockey is the sport which is best in person but does not translate on TV at all. I stick by that. However, the Blues' marketing department has done enough to get my curiosity perked at the start of the season for the first time in six years, so they're doing something right.

You didn't think he'd play. I didn't think he'd play. But play he did, and play well at that. The best thing his playing did was to shut up the rather vocal two percent of Rams fans who think Jackson's ego isn't worth having his talent for. The whole "Darby is better than Jackson" crowd is eerily similar to the "Randy Winn is better than Colby Rasmus" protesters. It's as if they may be the same people...

I bought these things from a store on Virginia off Bates called "Cool Stuff Really Cheap" for $3 a month ago, and I feel as if they have finally made my childhood complete. I also bought a set of highball glasses straight out of Don Draper's office there, which made my adulthood complete. Love that weird, random store.

How the hell does Brett Hull not have a statue yet? You know how I'd design his statue? As a guy ordering a 7th St Sicilian poor boy sandwich at Blues City Deli, which is the only time I've ever actually seen Hull in person.

If anything says #6 on a top 10 list, it's a mediocre sportscaster with a winning attitude!

Last week the crypt-keeper wrote about how DISH Network subscribers could lose FSN. Then he wrote about how they did lose FSN. Who else could have broke that story? Evan Benn? laughable. That is riveting journalism, and I'll debate anyone who claims it's ridiculous for a struggling newspaper such as the St. Louis Post-Dispatch to devote a contributor solely to local sports media.  But this week, another story about Kevin Slaten. You've written that story before, Dan. Freshen it up. Don't let next week's story be about J.C. Corcoran joining some terrible radio station for the 3,000th time.

It's almost a slap in the face that Albert will "only" make $16M next year (and after taxes, commissions, etc, he really only makes about $8M, which I think we'd all admit is underpaid for being the greatest at one's profession, no matter what it is). I don't know if the Cardinals will resign Pujols or not — my gut says no — but if he asks for the moon, I can hardly blame him, considering how amazingly underpaid he's been for the last half-decade. Albert Pujols, incredibly, continues to be the most underrated player in baseball. We are absolutely spoiled by his greatness.

Most 58-year-old men who make grand entrances in a helicopter to watch a bunch of sweaty 16- and 17-year-olds are arrested on account of general weirdness. Gary Pinkel is praised for it. It's his state, we're just living in it.

The last time the state of Missouri cared so much about a possibly retired senior citizen driving cross country in an effeminate car, Harry Truman, late in his final presidential term, was driving his periwinkle Cadillac to Portland, Ore., to see Bruce, his old Army buddy and the only person who ever truly knew him. 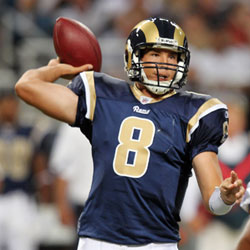 Sam Bradford has made professional football relevant in Saint Louis for the first time in six years, and it took him four short weeks. His play has been remarkable, especially considering he still doesn't have a number one receiver or a "good" offensive line, and faces blitz after blitz. He has the demeanor of Lee Majors and the looks of a young Tom Selleck. His skin makes newborns jealous. Women want to be him, men want to be with him — yes, you read that right. He's that good.

He is, in three words, The Balls Bradford.