And That's Why You Don't Double Switch Out David Freese

Share All sharing options for: And That's Why You Don't Double Switch Out David Freese

The most remarkable part of last night's based ball game, one of the most magical ever played, is not that I am still alive (something that I did not expect to occur circa 10:45 last night), but rather that the cardinals were down to their last strike twice, the first being in the ninth before David Freese hit a city saving two run triple.

The second time Lance Berkman, Old Salt and Pepper Beard, singled to center to tie the game in the tenth inning.

The Cardinals, down 10.5 games in August, down two games with three to play, down 2-1 to the Phillies in the NLDS, down 1-0 to the Brewers in the NLCS, down 3-2 to the Rangers in the World Series, had no business being here. Yet, come the 11th inning, we learned life's most important lesson, from J Walter Weatherman David Freese. 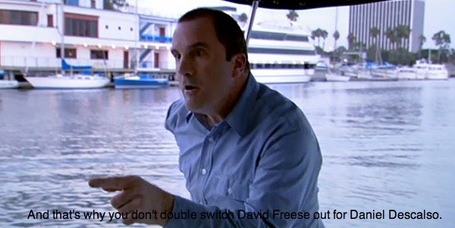 Game Seven of the World Series. Magical words. As a friend once wrote:

It's October in Saint Louis. And There Is Baseball To Be Played.