The NL Central will be a very different division by 2013. The MLB has announced that the Houston Astros are moving to the AL West, interleague play will last all year, and a second Wild Card team will be added in 2012.

The St. Louis Cardinals' division just got a little smaller.

News broke earlier today that the pending sale of the Houston Astros franchise to Jim Crane has indeed finalized, and as a direct result, the Astros are moving to the AL West.

Effective at the start of the 2013 season, the Houston Astros will no longer be in the NL Central -- where they have finished in the bottom three slots for the last three years -- and will move the American League West division.

For over a decade, the NL Central division has had six teams while every other division -- outside of the AL West -- has had five teams: 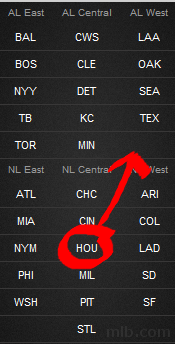 The St. Louis Cardinals will have an uneven division for only one more year. And, once the league transitions into a five-teams-per division model, the leagues will be forced to play interleague games all year, as commissioner Bud Selig said: "We'll have interleague play from Opening Day on."

Maybe it's time for the Cardinals to start shopping for a DH too?

Stay tuned to SB Nation St. Louis for more information, and for in-depth analysis on the St. Louis Cardinals be sure to visit Viva El Birdos. Visit Baseball Nation for more news and notes around the league.