Share All sharing options for: Pujols Cries When #PujolsCriesWhen Becomes A Meme

If you had not heard, Albert Pujols is no longer a Saint Louis Cardinal after signing a ten year deal worth north of $250 million. If this is the first you have heard of this, I hope you enjoyed your trip to the moon last week. Details into Pujols' negotiations with the Cardinals and Angels continue to pour in, including this little nuggt in Sunday's Saint Louis Post-Dispatch:

The Cardinals offered Albert Pujols $26M a year to play baseball. And he cried. Not for joy, either.

This news was met with much ridicule in Saint Louis as Internet person @spants took of the pillowy gloves of motherhood, sharpened her Internet wit, and created the twitter hashtag #PujolsCriesWhen.

Highlights after the jump. 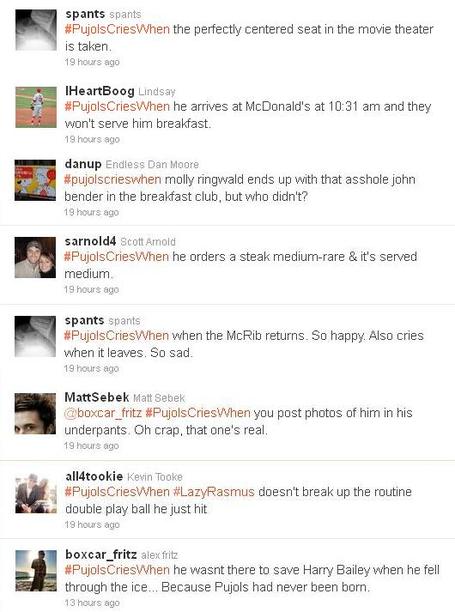 Jeez Albert, get a grip ya crybaby.

When reached for comment, Yadier Molina issued the following statement: