NL Central Preview: Previewing From Team B To Team A

The National League Central is anybody's to win. Except the Pittsburgh Pirates and the Houston Astros.

Share All sharing options for: NL Central Preview: Previewing From Team B To Team A

It's the last Friday before the 2011 MLB season starts and hopefully the last cold weather weekend until October. To celebrate, let's take a trip around the National League Central and see how it will shake out.

Milwaukee Brewers (Projected record: 89-73)
After attempting to play with a one man rotation in 2010, the Brewers made strong moves this offseason by acquiring starting pitchers Zack Greinke and Shaun Marcum to complement Yovani Gallardo. Led by a stellar pitching staff and a bounce-back season from Ryan Braun, the Brewers take the NL Central and carry on their long  tradition of not winning a playoff game.

Dusty Baker has never managed back-to-back division winners. I don't know why this is and I do not care to theorize, I'm just willing to bet the Reds as a team will regress from their championship run of 2010. While I do like General Manager Walt Jocketty's continued goal of recreating the Cardinals' 2004 105-win team by employing a bunch of league-average starting pitchers and a robust offense, in Dusty Baker I do not trust.

Saint Louis Cardinals (Projected record: 82-80)
In a eerily familiar season, the Cardinals will get off to a hot start in April and the early half of May until the San Diego Padres point out the fact that "right fielder" Lance Berkman is using a Segway. Forced to play without his personal mobility device, he strains his hamstring in the second inning and is lost for the season. In June, David Freese attempts to ford a river and is lost to dysentery.

In a happier twist, Chris Carpenter takes home the gold in FOX's summer hit TV show "So You Think You're Angry!"

Chicago Cubs (Projected record: 33-55)
The Cubs get off to a hot start and are twenty games above .500 on Memorial Day. They don't win a single game after that and end the season on literally a roller coaster to hell. 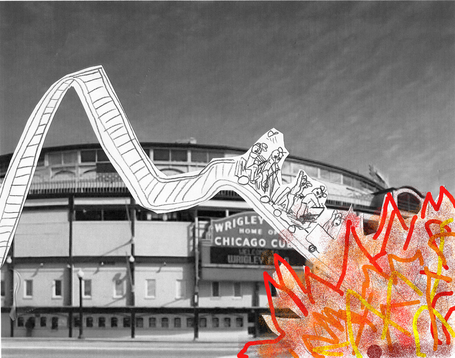 (rest of season canceled on account of being in Hell.)

I don't know. Somebody does something and the view from the ballpark is awesome. Also, those sandwiches with coleslaw and french fries on them are fascinating. And I could walk the Clemente Bridge all the live long day. But, yeah, another bad year in Pittsburgh.