St. Louis Cardinals Review: A Series of Lists and A Work of Fiction

Two weeks into the St. Louis Cardinals' 2011 season and it's time to take inventory on who is what and what is whom. And a sneak peak of Miguel Batista's next work.

Share All sharing options for: St. Louis Cardinals Review: A Series of Lists and A Work of Fiction

Things Tyler Greene is on Pace to Lead the League in:
Most Completed Highlights Magazine Puzzles
Just Standing Around
Being Sent Down to AAA When Nick Punto is Healthy

Reasons People Dislike Colby Rasmus:
Stupid Flowing Locks
He is Neither Jim Edmonds Nor Rick Ankiel
Have you seen what has happened to the economy since he started playing in MLB?

A Leaked Passage From Miguel Batista's Next Work, Changeup, He Wrote

The manager, Tommie Ra Lussa, had just taken the ball from his young starter. "Good job, rook, but we need to bring in the vet," the skipper said with a pat on the butt. Michael Bitasta, 41 years old but with the looks of a young Antonio Bandera, strode in confidently from the bullpen. On pace to clinch his Major League Baseball record 900th save in a few weeks, Michael had matters not of the game on his mind. Behind home plate he saw a man he had not seen in nearly a decade, when this man of mystery waited outside the office door of M. Bitasta, P.I. Agency and offered to pay Bitasta $500 to murder his wife. Bitasta had turned the man in to the local authorities, but he appeared to have been released and was back to settle the score... With a vengeance!

"Give 'em hell, Bitasta, just five outs to go," Ra Lussa said, handing the strikingly handsome closer the ball. Bitasta said to himself in his amazingly sexy voice, "Oh, no worries skip. This save... is personal."

(Note: I just wanted to remind myself how much I disliked last year's team.)

A PIcture Of Brian Tallet: 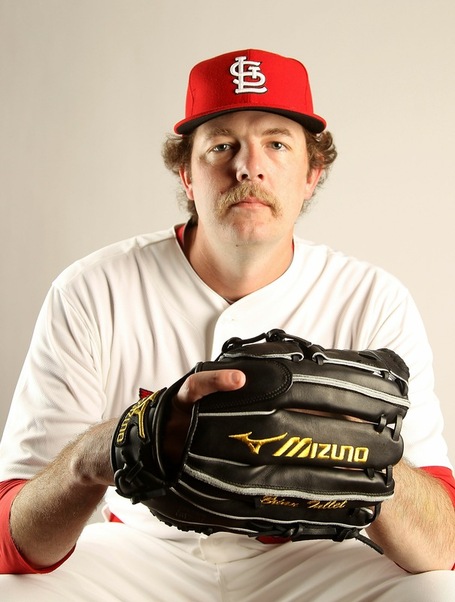 Things That Are Distracting Albert Pujols
Gold Plated Underwear Riding a Little High in the Crotch
His New Contract (to Save The Human Race)
Creepy Tyler Greene, Just Standing There