Albert Pujols And The Hug: Laying Money Down On 2012

We lay odds on where Albert Pujols plays in 2012, and give some reference to how the St. Louis Cardinals' best hitters are doing this young season.

Share All sharing options for: Albert Pujols And The Hug: Laying Money Down On 2012

In yet another example of today's snake-eats-its-tail media culture, a picture of Albert Pujols hugging Chicago Cubs general manager Jim Hendry became a big deal because: Hey! Albert is hugging Hendry! take a picture! (Note: put on front page of website). Hey, readers, look at this picture! No, It's not a big deal! (Note: "No, leave it up on the front page, you got to see this!") Why does everyone think this is such a big deal? It's just a picture! (Note: "WHAT? Take it down? No, our hits have never been higher!") Hey, Albert did you hear the picture of you hugging Hendry was a big deal? No, we don't think it is either (Note: New Headline: "Albert Hugging Hendry Is No Big Deal; Does It All The Time!"). Why is the media making such a big deal of this? Get a life, everyone else!

I will honestly say that this week's narrative is the laziest, self-driven, and masturbatory arc I have seen in a long, long time. Anyone suckered into writing about it should be ashamed of themselves.

Anyhoo, time to update the South City Sports Book lines on where Pujols ends up playing for his home team in 2012:

Cardinals +150 Despite the amazingly lazy hug storyline the media tried to deep throat us with this week, the Cardinals are still the favorite to retain their Hall of Fame first baseman. Whether spending $280M over eight years is a good idea to do so is a separate debate, but he is still the Cardinals to lose.

Angels +300 The line moved from +600 to +300 this week with the news that Kendry Morales will miss the rest of this season following David Freese Surgery. Morales will have lost nearly two seasons to injury, and while neither are his fault, the Angels would be foolish to count on the Cuban slugger in 2012. It will also be an opportune time for Los Halos to strike in the P.R. war against the cross-Southern-California, downtrodden Dodgers.

Rangers +400 This is where I personally want Pujols to land, if not in Saint Louis. I have no affinity to the Rangers or to Texas, but my GOB would it be fun to watch Pujols play 81 games a year in the stadium that turned Gary Matthews, Jr., into a slugger.

Cubs +600 The main reason I hope he doesn't go to the Cubs is because of how poorly his career will end. It's just an inconceivably bad idea and would probably find with him hitting .243/.310/.392 while being paid $30M a year in 2014 and then being convicted of mail fraud. There's no way it goes well.

Dodgers/Mets +800 A few years ago, these two would both be two-to-one odds to land Pujols. Thank you Bernie Madoff and whatever led to the McCourt divorce!

Red Sox/Yankees +850 Neither has any reason to do it. That being said, they're the Red Sox and Yankees.

Nationals +1000 Pujols! Harper! Strasburg! Um, Werth...  This would be fun to see. Also, if Los Expos would have permanently relocated to Puerto Rico, would the team be a super-power by now? Wouldn't players be willing to take a pay cut to live in the PR the entire year? I would.

We are now nearly a quarter of the way through the 2011 MLB season (23% -- which sounds insane right now) and Matt Holliday is on pace to put up a 9.3 WAR season. The last player to do that? Albert Pujols, circa 2008.

Other projections, of note:

Lance Berkman is on pace for 7.67 WAR, or Oralando Cepeda's 1967 Cardinals campaign.

And, finally, this is a picture of Brian Tallet: 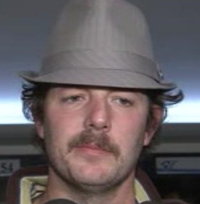