Explaining The 2011 St. Louis Cardinals To Someone Awaking From A Coma

The 2011 St. Louis Cardinals season, as explained to someone who's been in a coma for the whole year and has a bitchin' goat.

Share All sharing options for: Explaining The 2011 St. Louis Cardinals To Someone Awaking From A Coma

You sit quietly in the beat-up pleather chair, rotating between skimming a three-month-old Sports Illustrated and checking Twitter on your phone. A muzak version of Stevie Wonder's "Part Time Lover" plays from the ceiling, echoing down the linoleum tiles of the hallway. Next to you lies your friend, Larry "Tap" Kissinger, unconscious since a trick jell-o shot went horribly awry on New Years Eve. You've been here almost four hours, just in case he wakes up.

The nurse, a young Vietnamese immigrant named George Labrador, was in not too long ago to shave Tap's facial hair into his trademark goatee. Tap's been rocking the "goat" (as he calls it) since making varsity starting tight end sophomore year. My God, man, that was twelve years ago. It's been six years since you and Tap graduated from Southwest Missouri State (Tap majoring in Marketing, or, as he liked to call it, being a "Professional Asshole.") 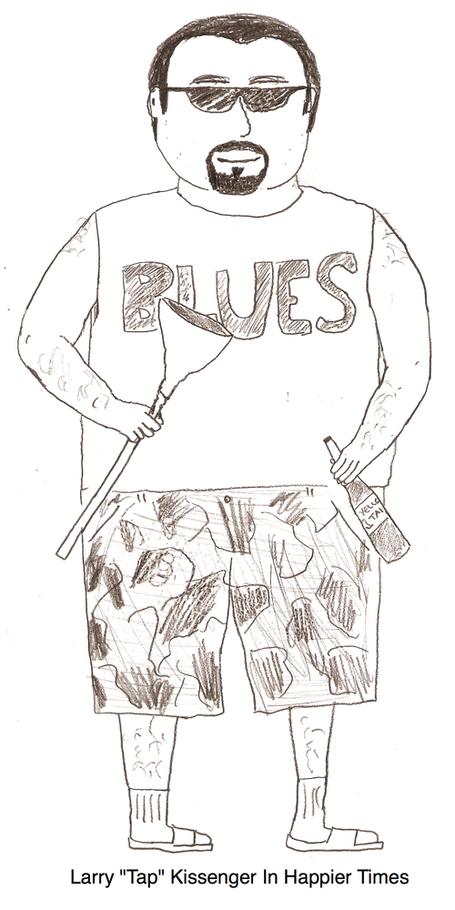 George has been your only company today. You've been visiting Tap for six hours a day ever since the accident. Frankly, it's getting old. "[beep] or get off the pot, Tap," you thought to yourself earlier. Rick and Brenda, Tap's parents, should be by to take your place around eight. The whole ordeal has been daunting for them.

A page comes over the intercom above his bed. Doctor Chet Housington is needed in surgery. Suddenly, Tap shifts and mumbles something about "Chad Sexington" under his breath.

"You've been in a coma since New Years, you idiot."

"You fell out of a window doing a jello shot."

"Well... We killed Bin Laden. That was cool; we all got drunk, for some reason. Oh, Donald Trump made Obama show his birth certificate. And we are kind of at war with Libya. Packers won the Super Bowl. There's been a bunch of floods. Your wife left you. Albert Pujols plays third base now. The world ends tomorrow."

"Broke his hand or something."

"Damn, that sucks. What else are the Cards doing?"

"Oh, that's right, you've missed all that. Well, Wainwright is out for the year with Tommy John surgery. Albert Pujols didn't sign a contract extension and is hitting like .260. Ryan Franklin has an ERA north of 9 and has been worth -0.8 WAR. He blew like six saves and lost the closer's job, but Mitchell Boggs and Eduardo Sanchez blew some saves, too. Matt Holliday had to get his appendix taken out in the middle of April. Ryan Theriot is our shortstop, but he and Tyler Greene have combined for literally a dozen errors already. Colby Rasmus is afraid of walls now. Hell, Pete Kozma was called up after putting up a .568 OPS in Memphis!"

"Nah, he actually has a really bad case of shingles. Had to leave the team and go up to the Mayo Clinic. Almost didn't graduate. Bing."

"No, I'm serious. He missed the Cincinnati series last weekend. We got swept and then the Reds broadcasters talked up a bunch of [beep] about Dave Duncan and Chris Carpenter."

"I'm not surprised we got swept. This season sounds awful. Have we even won a [beep]ing game yet?"

"Lance Berkman and Matt Holliday are setting the world on fire. Rasmus has been good. Jaime Garcia's been real good. So has Kyle Lohse. The whole rotation has been more than cromulent, really. Everybody's getting on base, taking lots of walks. Heck, Kozma even had an RBI double his first plate appearance! It's been a fun team to watch."

"And Pujols and Franklin sucking and Kozma being on the team and all that?"

You and Tap stare at the wall in silence as he processes all that is new to him in this crazy 2011 world of ours.

Minutes pass, noted by the Lighthouse For The Blind clock hanging on the lime green painted cinder block wall directly across from Tap's bed. A Muzak'd rendition of Don Henley's "Dirty Laundry" now plays from above. Tap breaks the non-Don Henley silence.

"THAT'S OUR TAP!!!" Roars the studio audience in unison.