Should Jon Jay be the St. Louis Cardinals' everyday center fielder? Should Colby Rasmus be traded? Would Tony Rasmus take to the air on a ham radio to make statements if this was the 1970s? What is with all the brightly colored shoes lately? Whatever happened to Rick Ducommun? SB Nation Saint Louis has scoured the internet to answer your questions. Now hang up and listen.

Share All sharing options for: Jon Jay Vs. Colby Rasmus: The Internet Decides

Have you ever found yourself in an argument over something trivial ("Wayne from The Wonder Years was not on Trapper John, MD!" "Yes he was!" "Was not!") before realizing that you could just use an app on your phone to find the answer in five seconds rather than arguing all night? ("Huh... He played 'Ricky Mercer.' I'll be damned." "You owe me five bucks, Bronnosaurus Rex.") That's what we're here for.

Sick of constant radio spots, vague newspaper teases, message board posts, and general tomfoolery concerning Jon Jay versus Colby Rasmus, we checked the internet via search engines and popular social media tools to figure this s-word out for you.

What this tells us: Jon Jay doesn't care about anything but the team! Oh, and twitter. And the President of the Continental Congress. A well-rounded, true renaissance man, that Jon Jay! 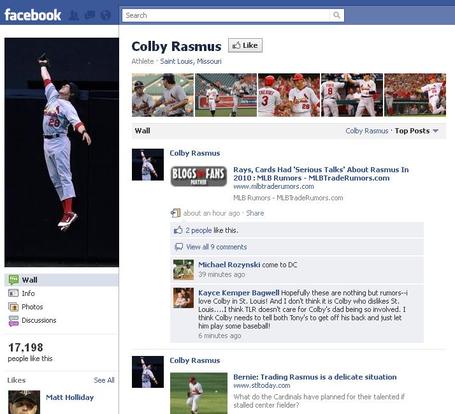 What this tells us: First, his profile picture shows that he is not in fact afraid of walls, so shut your dang ole Yuengling drinking mouth, Andy Van Slyke! Second, the articles posted on his wall are about him not performing up to expectations and being traded. If this was actually a page run by Colby Rasmus, I would consider it the saddest page on the internet. But, look! He likes Matt Holliday! That's sweet of him. 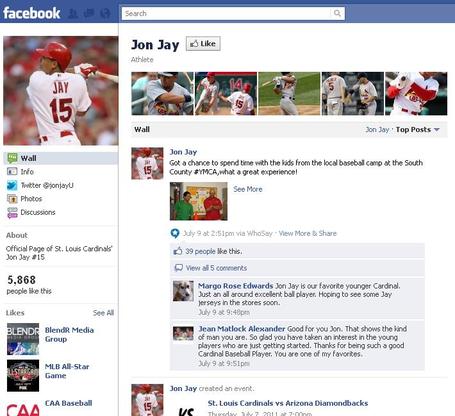 What this tells us: Jon Jay loves volunteering for the kids. And using hashtags on facebook, which I'm not sure is really a thing. And judging (pun?) by the comments on his page, he is the favorite player of decent-valued, middle-aged white women all across the Midwest. Also: Puppies and sunshine! 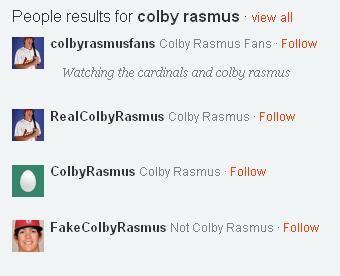 What this tells us: Rasmus is not on twitter. I assume he thinks it's for riff raff. 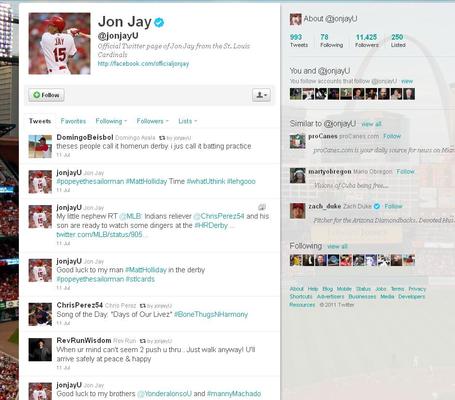 What this tells us: Jon Jay loves the Twitter. Also: shoes. And really likes Chris Perez listening to Bone Thugz n' Harmony, which is cool, since Perez is in Cleveland now, and that's where Uncle Charles (RIP) and someone's dog were once killed in "Tha Crossroads." Jon Jay is a man of the people, for the people. 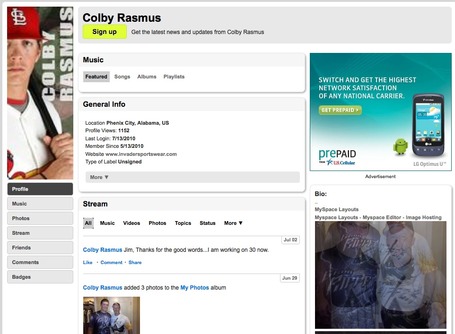 What this tells us: He's from Alabama, enjoys ugly t-shirts, and is not currently signed to a music label, which I strangely find disappointing.

Jon Jay is not on MySpace.

What this tells us: I'm honestly amazed Rasmus -- or, anyone, really -- is still on MySpace. Is it only accessible over a Prodigy dial up connection? Is this information I can find out in AOL chatroom "BBWFM [[[[[[[[MYSp@C3 ONLYZZZZZZ]]]]]!!!!"?

What this tells us: In 2009, somewhere in the suburban Saint Louis area, a young woman named Geiger loved Colby Rasmus. In thirty years, they will meet, fall in love, and marry, and their love story will be featured in a movie entitled Geiger! Let's Go! To The Chapel! It stars Colin Hanks as Colby Rasmus and Rick Ducommun as the minister.

What this tells us: I challenge you to find any footage of Jon Jay where it looks like he is not having the time of his life. If it wasn't for this guy, Jay would be a shoe (Pun! He likes shoes!) in for happiest man in the world. 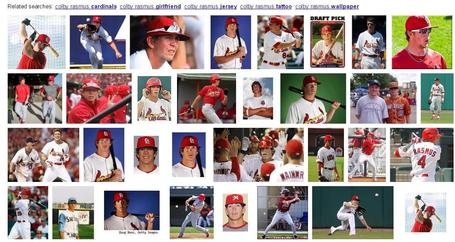 What this tells us: Colby Rasmus does not know how to play the game the right way. He can't even put his sunglasses on his hat correctly. ¡¡¡ʎqןoɔ 'uʍop ǝpısdn ǝɹ,ʎǝɥʇ

Also, he is being chased around the field by noted clubhouse malcontent Brendan Ryan. That docks him at least five "La Russa Points" whenever Tony La Russa Google Image Searches him (which is more often then you'd expect. Creeper.). And you totally know he doesn't catch that ball in the bottom right picture, right? 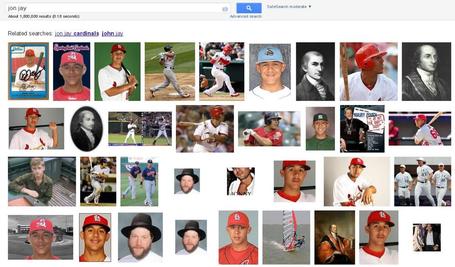 What this tells us: Jon Jay may not be the happiest man in the world. But he is at least the most bemused man in the world. Always grinning! Also: A founding father! Some sort of Army private! Maury Povich! An Amish man and/or mandolin player! Water sports! AMERICA!

Trade Colby Rasmus: Nay! As netting equal value would be nearly impossible. Unless it was for Jordan Zimmerman. Although teenage girls in questionably short shorts aren't making music videos about Jordan Zimmerman. Or are they...

Trade Jon Jay: Nay! He's the perfect fourth outfielder. And person. If Gandhi and Mother Theresa drank a few too many glasses of Chuck Shaw one night, got busy, ol' Gandhi slipped one past the goalie and they had a kid, it would pattern its life after Jon Jay.