Why Tony La Russa is taking the brunt of the fans' frustration for a St. Louis Cardinals team most thought would win ~85 games and is on pace to do just that is a question for another day; today we ponder La Russa's past, and look to see what other star he best compares to.

As you may have heard recently, whether from people who call in to radio shows (quaint), write letters to newspapers (quainter), or via skywriting (quaintest), Cardinals manager Tony La Russa is not a very popular man around town at the moment. Today we sit down to take a look at his legacy, and compare it to other men who have had long, successful careers in their fields.

As a baseline, this is La Russa's regular season career, in graph form: 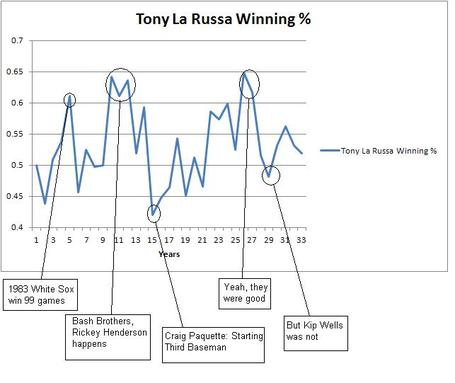 You got your ups, downs, ins, outs, and what-have-yous. It has been a very successful career for the skipper. But how does it compare to other men?

The first person who came to mind was his contemporary, Bobby Cox. La Russa has now managed for 33 years with a winning percentage of .534. Cox retired 33 years after having managed his first game (HINT, HINT TONY) with a .556 Winning percentage. Lets take a look at the timeline. 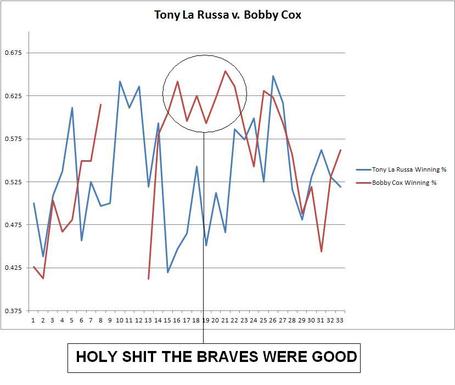 So, yeah, the Braves extended run of success is really quite remarkable. As was the turn around the Braves had when Cox stepped out of his role as General Manager (that's the gap) and back into the dugout. Don't get any ideas, Mozeliak. I'm going to go ahead and officially declare Bobby Cox as UNDERRATED, a tag you would probably never hear applied to Tony La Russa.

I think we can do better.

Let us move on to another man of Italian descent with a long and storied career: Robert De Niro. More specifically his career from 1970 to 2002. 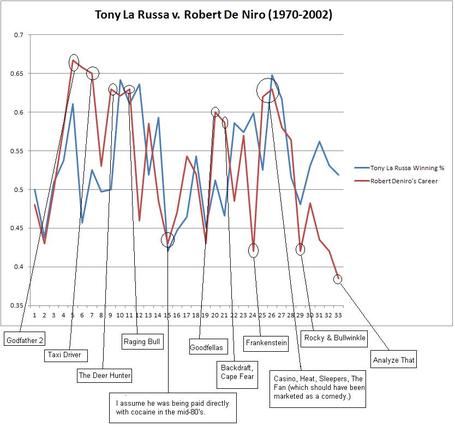 That is pretty darn close, though De Niro's early 90's resurgence throws things out of whack. Also, I believe this is rock hard evidence that La Russa should retire before making the baseball equivalent of Little Fockers. Tony La Russa: Kind of Like Baseball's Robert De Niro.

Let us see how La Russa stacks up to the only correct answer to the question "Who is your favorite Beatle?": George Harrison. Specifically George Harrison from 1960 to 1992. 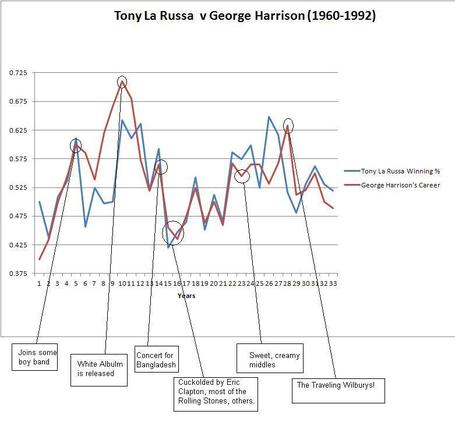 Okay, well that's downright freaky. Though Harrison had to deal with, um, everyone having sex with his wife, so he gets bonus points. Still, a remarkable similar run of sustained excellence. Congratulations to Tony La Russa: Baseball's George Harrison!

Wait, there's one more? Well, get to it already. 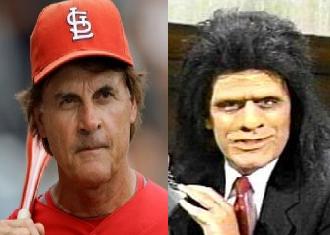