Person who writes about baseball for a living Jon Heyman sent out the following tweet this afternoon:

#reds and #rays are in on ryan theriot, a versatile infielder with a excellent bat. #astros also have some interest

We assume he's not being ironic here, or else he would have read:

#reds and #rays are in on ryan theriot, a "versatile" infielder with a excellent (I'm making a jerk off motion with my hand here) bat. #astros also have some interest

As a recent victim of Theriot Fever, we feel as if we are in great position to break down how wrong Heyman's tweet is:

1. "Versatile Infielder": Yes, versatile. He can be both one of the worst fielding shortstops in baseball or one of the poutiest, below average second baseman in baseball.

The Cardinals led the division until July 27, four days before the Furcal acquisition. Speaking only about his own role, Theriot noted, "When I was playing shortstop we were in first place. I know that. It is what it is."

Given the chance he could probably be a really bad third or first baseman, too.

My real issue here is Heyman's use of "excellent." Even if you see good traits in Theriot's offensive performance, in what universe would it qualify as "excellent?" This is an egregious misuse of an adjective. Baseball players everywhere who are actually excellent should be offended.

Alternate possible theory: Heyman was describing Theriot's actual bat, which is better made than most bats: 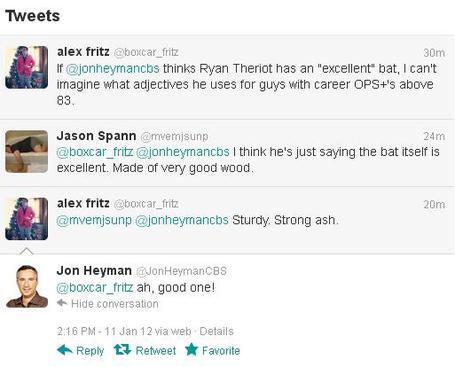 It wasn't lost on us that even Heyman can not gloss over Theriot being one of the worst baserunners in the history of the sport, so much so that the statistic TOOTBLAN (Thrown Out On The Bases Like A Nincompoop) was actually invented specifically to measure Theriot's crapulance.

He will be a welcome addition to any ball club, so long as it is not the Cardinals.