Jake Westbrook, Literally In The Best Shape Of His Life For St. Louis Cardinals

Share All sharing options for: Jake Westbrook, Literally In The Best Shape Of His Life For St. Louis Cardinals

It's not often we get to say this without sneering, so indulge me: Jake Westbrook, the St. Louis Cardinals' third-starter-turned-fifth-starter, is literally in the best shape of his life. As pictures have come out of spring training it's become obvious that the weight loss teased in early spring notes columns was no joke. For instance: 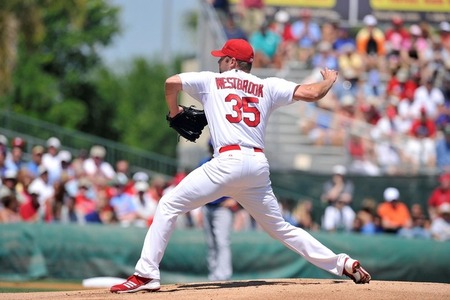 I feel a little uncomfortable saying this, but look at that! Compared to a Google Image Search for Jake Westbrook—keep SafeSearch on, just in case—it's clear he's never looked better. Combined with his excellent performance—he out dueled Stephen Strasburg Saturday—it's suddenly very easy to get caught up in small sample sizes.

Of course there's no way of knowing just how well Westbrook will pitch from fewer than 30 good spring innings and an especially healthy offseason, but he struggled so much in 2011 that it's become increasingly possible to expect him to regress positively in 2012. And I'll take that, even if it makes me wonder about Jake Westbrook's svelte new figure. Which I'm not totally ready for.