Rams Vs. Seahawks Score Update: Steven Jackson Adds A Late Touchdown, But So Does Marshawn Lynch

Share All sharing options for: Rams Vs. Seahawks Score Update: Steven Jackson Adds A Late Touchdown, But So Does Marshawn Lynch

It may have resulted in a touchdown, but Seattle's 10-play, 76-yard scoring drive was hardly fun to watch for St. Louis fans. It look St. Louis eight plays inside of the red zone to earn the touchdown, including six tries from the 1-yard line. A taunting penalty called on Seattle cornerback Richard Sherman extended the drive.

The positive vibes wouldn't last long for the Rams. After a failed onside kick (and ensuing challenge), the Seahawks extended their lead to 30-13 thanks to a 16-yard touchdown run by Marshawn Lynch. The score capped a 5-play, 42-yard drive.

Lynch was showered in Skittles after the touchdown run. 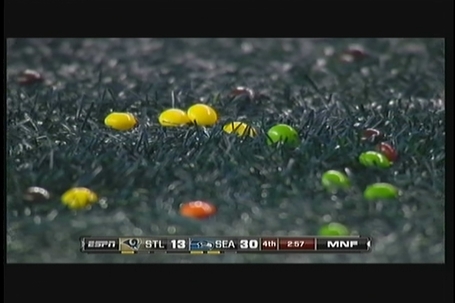