Share All sharing options for: Confirming Tebow-Mania in Saint Louis

Then there's Atlanta against Houston, that's an 8-3 teams against a 7-4 team, with the Falcons being a road favorite (2 1/2 points) and the Texans hoping TJ Yates doesn't become their next Spinal Tap drummer-esque victim at QB. Pretty darn compelling.

So which game will Saint Louis be watching on FOX?

Let's go to the big map!

From the "Can't Live My Life If This Every Went Away" website the506: 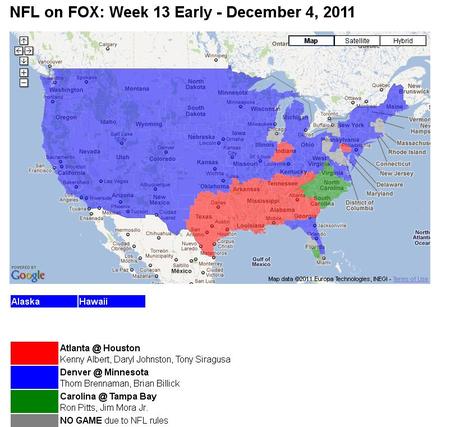 Scientific proof that Saint Louis, and the rest of the nation, have come down with a hard case of Tebow-Mania.

Which is exciting, since if the timetable Saint Louis normally uses to adapt to national trends was used here, we'd all be wearing Tebow jerseys in 2015 when Tim Tebow is a second string tight end for the Jacksonville Jaguars.