Leave It To The St. Louis Rams To Screw Up Social Media

Share All sharing options for: Leave It To The St. Louis Rams To Screw Up Social Media

Chances are you’ve heard these words in roughly 100% of the meetings you’ve participated in the past 3 years.

The trend to have everything housed online isn’t new per se, but the dynamics of how people use the web have shifted drastically in the past three years. Facebook and Twitter are now just as valuable for recommendations and breaking news as Google or CNN.com ever were. So when the Sports Business Journal came out with a ranking for the best/worst social media players in the NFL I guess it wasn’t a surprise to see the St. Louis Rams in dead last place.

And it’s not close.

Jacksonville, where I’d estimate roughly 18% of people can afford toilet paper, let alone a computer of some sort, has almost 60K more Facebook fans than the Rams. Detroit is almost 7K up on the Rams in Twitter followers and when you combine the team's two main metrics – they barely have over 100,000 people in their active community.

The Dallas Cowboys have 2.6 million.

So what the hell? It’s not like the Rams haven’t had some sort of marketing meeting the past 36 months without someone mentioning Facebook or Twitter (although, if any franchise were to ever have three years of meetings sans social media, the Rams would top that list). Let’s dig deep… 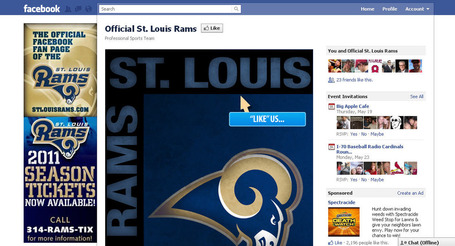 Oh brother. This could be the textbook case of what not to do on Facebook fan pages. Big garish graphic? Check. Absolutely nothing to interact with? Check. A request to ‘Like’ for no reason whatsoever? Check.

It’s circuitous, I suppose. Like the Rams and you’ll be taken to a page that asks you to like the Rams.

You know the best part about Twitter? You can really interact with people. If you @ Shaq he may reply to you directly. Twitter is cool like that.

The Rams? Well they don’t ever connect with the fan base. They spam out links to their own stuff. They don’t RT other interesting articles that people like Dan or Alex may write. They don’t Tweet on a regular basis.

The Rams are never going to be as popular as the Steelers or Cowboys or Packers. And honestly, I’m fine with that. But this social media ‘thing’ isn’t going away. Probably ever. So the Rams need to get in the game in a real way and not just with some cursory pages because everyone else has them.

I know the Cardinals Twitter people. And Facebook people. Because I’ve interacted with them and they’re working to make sure we’re engaged.

The team might have been better in ’10, but the social media is still lagging back to ’08.