It's 103 degrees out and my air conditioner is struggling to get my house below 80. A Summer Lager still makes a lot more sense than an Octoberfest. So why do I have the urge to start a bonfire and wear a hoodie? I'm watching Wisconsin roll ass over UNLV right now. COLLEGE FOOTBALL.

I love most Saturday mornings, all year long. They involve sleeping a little bit later, not showering, maybe a farmers market, and probably some alcohol. Nine-ish months out of the year, there are some futbol games to take in, but from September through November, there are a few hours of soccer as teaser followed up by an afternoon of American college football.  And in September there still enough time in the day to sneak in a farmers' market trip.

College football is far from a religion in the Saint Louis area, even though we're blessed to have two big schools within a few hours (one successful (Missouri) and one Illinois.) Records are important, sure, but it's more fun just for your team to be relevant, to have a reason to party, hopefully see a win, and have a great time with your friends.

Prognosticating, I see Mizzou going 11-3 this season (two losses to OU and a bowl loss). Illinois I believe will get everyone hot and bothered with a 6-0 start heading into a meeting with Ohio State on October 15th... which they win to go 7-0! They then lose four in a row to Purdue, Penn State, Michigan, and Wisconsin before beating Minnesota and winning a meaningless bowl game to go 9-4. Ron Zook then signs a lifetime, Tony La Russa-esque contract with Illinois.

Anyway, the football isn't important. We're just here for the tailgate. Below are a few recipes for a nice little spread for four people, or two fat guys: Eggs in Hell Pizza, Grilled Chicken Wings, and Bloody Cesars.

For the pizza, you will need:

The night before, heat the oil in a skillet. Once hot, cook the onion, garlic, peppers and red pepper flakes and cook until soft, about 5 minutes.

Add the stewed tomatoes, tomato sauce, tomato paste, and sugar and bring to a boil. Turn the heat down and let simmer for ten minutes, then cool and refrigerate.

Pre-heat your oven to 450. Roll out the pizza dough to your desired thickness, fold over the edges to make a small crust and bake in the oven on a pizza stone covered in corn meal (or an oiled cookie sheet) for three minutes, or until just crispy. Take it out of the oven a pierce any bubbles down with a fork. Refrigerate overnight.

Place the wings in a steaming basket and steam over medium heat for 15 minutes. Allow to cool, then combine all ingredients together into a large, resealable plastic bag and refrigerate overnight.

To drink, a Bloody Cesar:

Mix all the ingredients together and refrigerate overnight.

You are now done prepping for the night. Get some sleep, as tomorrow is an early morn. Or, hit the bars, drink too much, make mistakes, do whatever. Just make sure you set your alarm to get up in the morning to make it to the tailgate.

The next morning, at the tailgate, either hungover or clear eyed, fire up your grill.

Take the bloody Cesar pitcher and add a 12 oz of beer to the mix. Pour however much ice and vodka into a glass and top of with the bloody mix. OPERATION: COMMENCE DRINKING is a GO.

Take the pizza crust out and spoon the tomato mixture onto it, as you would with pizza sauce. Top with cheese. Once the grill is hot, crack the eggs individually onto the pizza, season the eggs with salt and pepper, and place the pizza on the grill. Put the pizza on the grill, and grill for about ten minutes, or until the cheese is melted and the egg whites are set (or longer if you like your yolks set as well).

Take the pizza off the grill, top with green onions, and let rest for four minutes before slicing.

Wipe the grill down with an oiled towel, then place the chicken wings on the grill. Grill, turning the wings every few minutes, for about fifteen minutes, or until the skin is crispy and charred and the meat is cooked through.

Your last step is easy: Eat like a king, drink like a freshman, and don't be surprised when Zook goes for it on fourth and long. 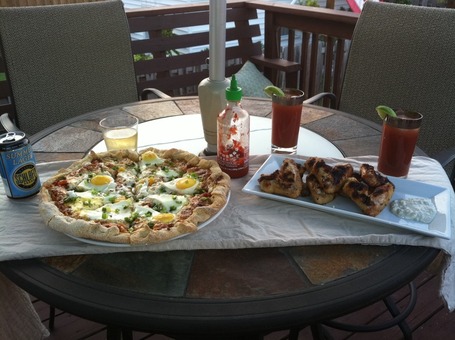 It's (almost) fall. It's Saturday. It's college football.