Oh, so you were the one.

You saw those 3 losses in 6 games. You saw the Colts comeback. You thought that 2011 was kind of a fluke or at least a perfect storm of talent plus luck. You thought the Packers were going to get beat by the Rams.

Before the Giants tagged them in the playoffs, the Packers were the prohibitive favorite to win the Super Bowl. By spending almost all their draft picks on defense, they were expected to be better in 2012. A back-up referee crew cost them one win. A "win one for coach" game cost them another.

The Pack should be 6-1 and in the discussion for the top 3 teams in the NFL right now. But as little as two weeks ago, people were throwing dirt on their graves. They're a good team. Could end up being a great team. And the Rams are a OK team. At best. This wasn't going to be a fair fight.

Just so we're all clear: TDs are OK.

Legatron has been so good, maybe the Rams are under the impression that they are playing to get him into position to kick field goals and that their coaches and fans will be mad if they settle for touchdowns instead.

Or, more likely, it's becoming pretty evident that year 3 of the Bradford helmed offense is turning the Rams into a poor man's version of the Jets. With far less flagellating on ESPN's First Take.

It's not easy to score TDs in the NFL. But it's becoming more difficult to look at Sam Bradford throw terrible interceptions (like the one with 1:17 left in Q3 that buried any chance of a comeback) and wonder just when the media is going to start wondering if the Rams calculated wrong by sticking with Sam Bradford.

What's that? Did I read Bill Simmons this week? Uh oh...

And that was published before Week 7.

I mean, at least on the surface it looks like SJ39 is getting mitigated some with the assent of Daryl Richardson. Put in the new void clause that Jackson has after the season... and that bizarre injury slash benching situation Week 2 against Washington?

I don't know. It's looking like the groundwork to part ways with Jackson sooner than later. Maybe he'll go to a place where he'll be more appreciated than he is in St. Louis. Bradford doesn't get compared to Kurt Warner, but SJ was the guy that pushed out Marshall Faulk. People are still partial to #28.

It's not fun to admit, but it's the truth. They had roughly half the fans in the dome Sunday and probably close to 70% of the noise. Frankly, I would have expected to have been worse.

The Rams are like a terrible boyfriend. They've been ignoring us and our needs for years, but we've kind of stuck around in this relationship hoping against hope that they'd wake up and realize they've got a good thing here with us. They've shown some moderate improvement lately. And we're encouraged. But we're not ready to put those trust issues to bed yet since he's got his eye on that girl from LA.

Shitty analogy aside, the Rams are trending in the right direction with fan relations... but until their fate is determined for the long haul, Rams fans can and SHOULD sell their tickets to opposing fans for a profit.

If they sign a new 30-year lease with STL, then OK, let's start bagging on the fans. But if you've been the skid mark in the NFLs underwear for the last decade and you have not ruled out moving...

Got to do what you've got to do. 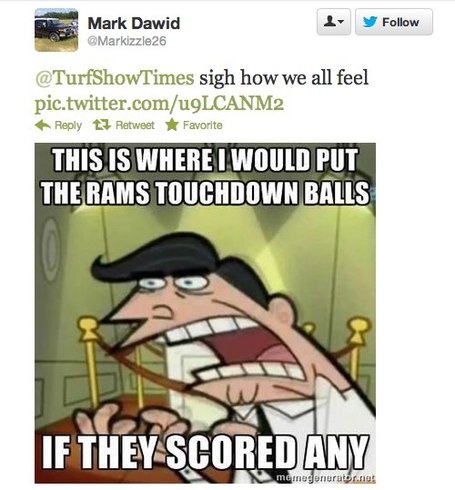 And that about sums it up, no?

I didn't know it was THAT bad. Oy.

And we'll leave you with this little insult to injury. Rams bench warmers not only aren't contributing... they're helping the other team win.