NFL headsets, marketing, and how Motorola is the dumbest company on Earth

Motorola is still a company. And is still spending marketing dollars. But they decided that the best deal in sports product placement wasn't worth it.

Share All sharing options for: NFL headsets, marketing, and how Motorola is the dumbest company on Earth

Something is missing from the 2012 NFL season. It took about eight weeks, but I finally figured out what it was during the drubbing the St. Louis Rams took against the New England Patriots in London.

The camera panned to Jeff Fisher, staring out into nothingness, wondering what his next step was going to be in the revival of his mouldering franchise. The shot lingered for close to 10 seconds as Jim Nantz blathered about how Fisher will "get back to work" or some other Nantzian platitude.

Then it hit me: Motorola. Jeff Fisher looked different, because he didn't have the Motorola logo on his headset. In fact, no coach did.

What the hell happened to Motorola? 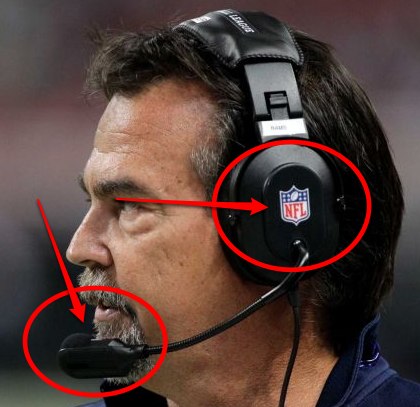 First, I looked to see if the company was still in business. I know that having a RAZR was pretty cool in college, but that was a long time ago. Apple still made computers for NERDS back then.

It is. Motorola is still making phones and other electronics for consumers and businesses.

But maybe they're just not sponsoring things anymore, right? After all, when companies hit tough times, they tend to cut marketing and advertising first. Was Motorola still laying out marketing $$$?

They are. They were the 16th biggest spender in the US for corporate marketing sponsorships in 2011, and just signed Bubba Watson to an endorsement deal right before The Masters this year.

So Motorola is still in business. And they're still spending $$$ on marketing? Then I'm confident in what I'm about to say next:

Motorola might be the dumbest company operating in America.

I spent Sunday watching the Red Zone channel. You want to know just how many times the coaches were shown?

Every play. That's how much. Every. Single. Play.

I started to try and count how many shots of coaches' faces were shown to make this piece more scientific. I quit because I should have been counting how many plays where the coaches weren't shown.

Try it next Sunday. It's like a laugh track. You can't ignore it once you've started to notice it.

Back to the Motorola people, though. How much exposure are they missing out on?

50 plays per game (conservatively) where the coach is shown with a logo on his mouth or ear or both. Times 16 games per week. Equals 800 shots.

Let's put those shots at three seconds per exposure (conservatively) and that equals about 2,400 seconds of exposure... in just the regular season.

Remember that this is in every game, every week, every market, in the most-watched live event on TV. So very roughly, you're reaching 25 million people each week through SNF, MNF and the regional CBS/FOX games. That's 400 million impressions (conservatively) that Motorola has passed on.

Worse—Nobody else wanted to buck up and put their logo on those headsets? We've got corporations paying millions of dollars to get their names on practice jerseys, but the headsets are the one thing the NFL can't sell? It's expensive, no doubt... but it's expensive because there is so much down time in football and the coaches are the only faces that aren't behind a mask.

I'm not sure why this bothers me so much. I have an iPhone. I wouldn't really consider a Motorola product at this point. Still, it seems bizarre to me that I'm the only one that's talking about this. You guys have noticed this, right? Motorola crapped the bed on this one.

But some marketing person in some meeting in some building somewhere saw the $40 million Motorola was spending in marketing on headsets and made a case to cut it out after 13 years.

That person has never been an NFL fan.

And if they become one, they'll probably want to quit Motorola for giving up the most unavoidable product placement in the history of sports.

Hell, probably in the history of TV.