Rams fans got a cold hard dose of reality when the first set of 2012 NFL Power Rankings was released this week.

They've signed Cortland Finnegan, Scott Wells and Kendall Langford. They traded the No. 2 overall pick in the NFL Draft for a boatload of picks, including an extra premium second rounder in 2012. It's hard to not like the direction of the Rams off-season, so when ESPN released their first NFL power rankings, you had to figure that the Rams were trending in the right direction. 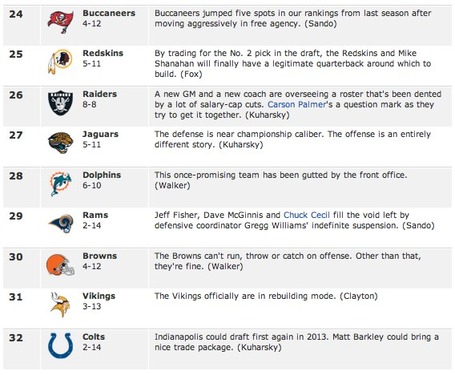 And, um, no. The Rams moved up only 2 spots from where they ended 2011 and are only ahead of the Browns, Vikings and Colts. The Cleveland Brows are a certifiable mess. They've somehow convinced themselves they can win with Colt McCoy at QB with nary a play maker in sight sans Mohamed Massaquoi. Oh, and PAT FREAKING SHURMUR!

The Indianapolis Colts have made every single move possible to ensure that the upcoming 3-13 season isn't pinned squarely on the shoulders of presumed #1 pick Andrew Luck. They're not trying to win in 2012 and they've made this abundantly clear.

And the Vikings? A lesson in building your team around a running back. Doesn't matter how good that running back is... it's risky business. Especially when something called Christian Ponder is now the main event at QB.

Yes, there's still room to move up. And yes, this poll is completely arbitrary, since there are still free agents on the market and it's impossible to predict how the draft will shake out and impact the upcoming season. But it's a cold dose of reality for fans, like myself, who were starting to get delusions of, well, .500, that the Rams have a LONG way to go before that happens.

Keep plugging along, guys. We're going to choose to not believe this poll... at least not right now.