For fans of the St. Louis Rams, the Nike NFL uniforms announcement has come and gone with little to be excited about, unless you're fond of new apparel technologies or slightly altered tailoring or tiny Nike logos on things. It's fine, don't get me wrong; it's just not going to blow your mind. It's not even going to engage with your mind, like the Seattle Seahawks' new jersey, which I kind of like. It looks... like an artistically lit version of the old Rams jersey: 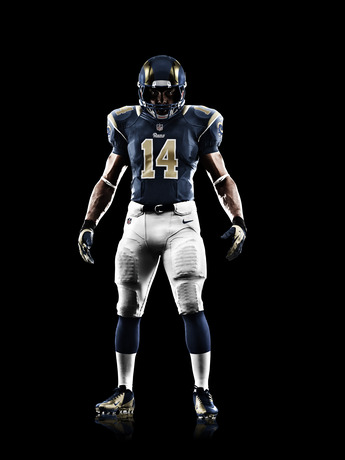 Welp: There you go. The worst part is that this was the perfect chance for the Rams to admit they were wrong to ever move to dark blue and gold from that goofy blue and yellow color scheme that will permanently represent the Greatest Show on Turf in the minds of Rams fans desperate for some good news about their moribund franchise.

Instead we got different tailoring. Well—there's still time. Eventually the Rams will wonder about the reason for all the throwback jerseys in the EJD—sorry, Trans World Dome—crowd.