The new Nike NFL uniforms are out. Here's a critical look at the St. Louis Rams' new old gear.

If you buy something from an SB Nation link, Vox Media may earn a commission. See our ethics statement.

Sigh. It's been a long time since the St. Louis Rams looked good on the field. As in literally looked good. Because for some silly reason (more $$$) they changed uniforms after the 1999 Super Bowl season to a gold/navy color palette that emotes a blandness even Jay Leno could envy.

The horns remained. Everything else skidded towards milquetoast.

When Nike acquired the uniform manufacturing rights from Reebok last year, hope ran high among Rams fans that past transgressions would be atoned for with the switch. Further fueling the fire was some guy who decided to mock up all NFL teams and 'leak' them to the internet. Turns out they were fakes, but the league, along with Nike, did just unveil the new NFL uniforms for 2012.

The Rams not only didn't get a new design, they didn't even go back to the royal and yellow jerseys they never should have replaced in the first place. To add insult to injury, the much maligned white pants/blue jersey combo was modeled for the press.

Let's fight through the disappointment and see exactly what we're working with in 2012... 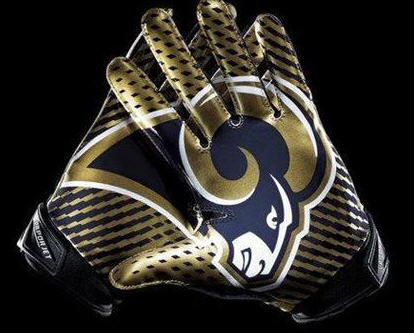 Won't it be fun when the Rams receivers catch a touchdown, spike the ball, preen for the camera, do a faux gang sign, and it all ends up being a licensed logo placement by Nike? You know, fun if the Rams had a WR who could catch a TD. 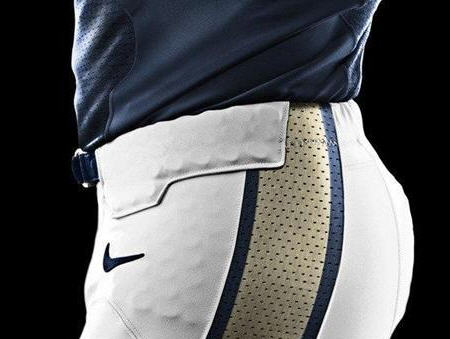 Why? Seriously why? Maybe you don't hate the white pants, blue jersey combination as much as I do, but you simply can't tell me that you actually enjoy it either. And if you tell me that you do enjoy it, then I want you to e-mail me a picture of yourself. Whatever you're wearing right now. Flip the iPhone around and take a candid picture. You don't even have to include your face. And I'll guarantee you that you're poorly dressed.

Oh, and some bigger holes on the piping. 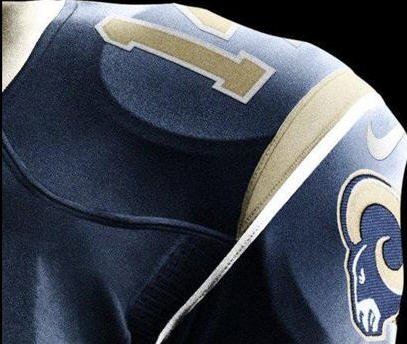 You know what: I'm glad Nike has stepped in for Reebok. For whatever reason, the New York Giants were the only team that used this tight moisture-wicking material in the NFL. Most other teams, like the Rams, still had that shiny material that was one step above the crap material on replica jerseys. Every single college team had moved on with uniform technology advances, but the NFL was reluctant.

Maybe that was a team by team choice. But if the Rams are going to look like crap from a distance, at least that crap is tailored. 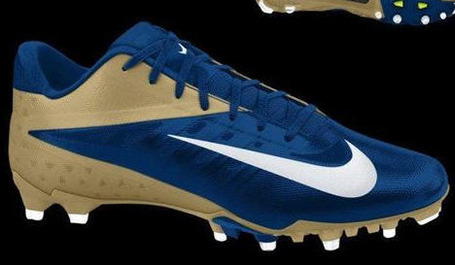 I have a pair of Nike IDs. They're pretty cool. You can go on and pick the colors and materials for everything on a pair of Nikes. I think I spent like 45 minutes on what color the Swoosh would be alone. Point is, I took my time. Really made a pair of shoes I love. Hell, I've even got my name on them.

On the other hand, it looks like Nike took a mailroom intern and told him to pump out a few Rams designs during his lunch break. Oh, you got gold and you got navy? Good job, Tim. Get back to work now.

This is highly scientific... but that slick, stretch stuff they're putting on Nike clothes now feels really cool. I have no idea what it is and wouldn't begin to know how to start Googling for it, but I'm glad they included some of it in the Rams' new jersey.

Even though the four-year-old Vietnamese who that made this particular version must have faced early-onset carpel tunnel syndrome, I'm sure they'll straighten out the lines in the finished model.

The helmet remains the same, along with my opinion of the Rams uniforms in general: NOT GOOD ENOUGH!

This isn't brain surgery, folks. Bring back the old jerseys. Done and done. Don't believe me? I'm putting up a poll below, and I know more people will agree with me.