The St. Louis Rams' stadium proposal—or counterproposal, if you remember the CVC's rejected initial proposal, which involved a $124 million package of Edward Jones Dome add-ons—is on the internet, and that means we have pictures of the proposed renovations, which are almost entirely indistinguishable from photos of the erstwhile TWA Dome. Sorry, I meant completely distinguishable. Take a look at these (and click for a full-size view.) 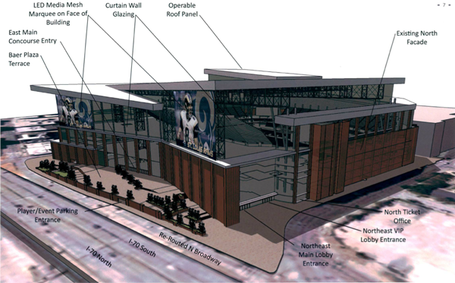 That's the existing north facade, if you can believe it. You'll notice the Edward Jones Dome is, in this mockup, the Edward Jones Building With A Bunch Of Roofs At Neat Angles. One more after the jump: 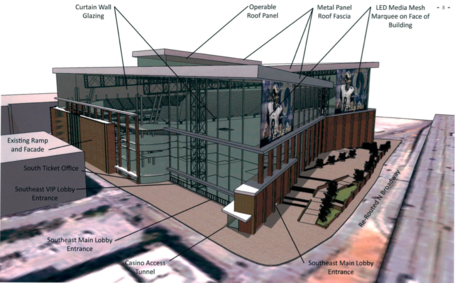 It's a beautiful renovation; I've long hoped that St. Louis could get itself out of the kind of vague retro influences the Edward Jones Dome's big brick rotunda—demolished here—typified, and all that glass would make for a very striking local landmark, and a fitting home for the Greatest Show on Turf. That said, we at SB Nation St. Louis remain more than a little confused about why the Rams think taxpayers should be footing so much of the bill.