A Critical Analysis Of The Rams' Edward Jones Dome Proposal

Share All sharing options for: A Critical Analysis Of The Rams' Edward Jones Dome Proposal

Ok. Last week we made the case that exactly zero dollars should be taken out of public funds to renovate the Edward Jones Dome. And we’re sticking by that stance. But that doesn’t mean that we can’t take a little peek into what the St. Louis Rams' stadium proposal has to say about the existing structure, right? We’re not buying a Audi R8 anytime soon, either, but it’s still fun to daydream.

THE FAÇADE (Part I) 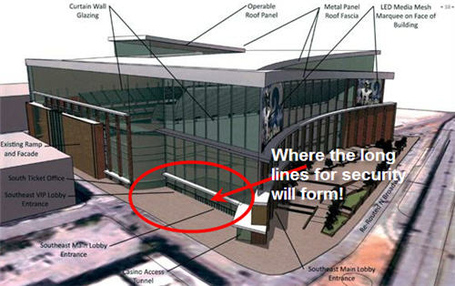 The GOOD: It’s like a giant hand came down from the heavens and pinched the sides of the current EJD. And then added glass because, you know, some people like sunlight on Sunday.

The curves actually give this stadium a sense of class that is really lacking right now. I don’t know who designed the current iteration of the stadium, but I’m really not kidding when I say I could do a better job. Seriously… what architect designs a huge hundred-million dollar building and doesn’t put a single signature touch on it?

The BAD: If you’ve been to a game since 9/11 you know that the NFL demands that patrons go through a security check. And if you been to a Rams game you know that it can take up to 20 minutes to just get into the damn place. Almost like a pre-torture before we get to see a single fumble from the Rams! So where are the extra entrances for better crowd control? PFFFT. It just needs to look pretty. 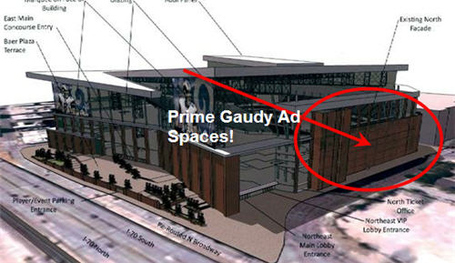 The GOOD: Again, more sunlight. There isn’t a place more bereft of sunbeams , sans Robert Pattinson’s cave, than the current EJD. So the more windows, the better. I’m not kidding you when I tell you that I’ve been in multiple arguments as to the merits of skipping some games and just staying at the tailgate… with tickets in hand. (Beer is cheaper, get some early fall sun on the face, food is cheaper, winter is coming and we can see terrible football on this here TV set… etc.)

The BAD: If you think the HUGE Dish Network advert on the outside of the Scottrade Center was tacky… just wait until the Rams sales staff gets their hands on this slab of brick. It might just be enough for US Fidelis to make another run at the aftermarket warranty business.

The GOOD: Natural Air? How will this affect the Rammies? Will the natural elements change the stiff home field advantage the team currently enjoys? Could a good hard rain wash away the misfortune of the 2000s? Regardless, the fresh air would be a more than welcome addition to St. Louis's pro football stadium.

The BAD: Why is it so tiny? It looks like a sunroof. Or the old Texas Stadium rootlet they cut out for God to watch the Cowboys. 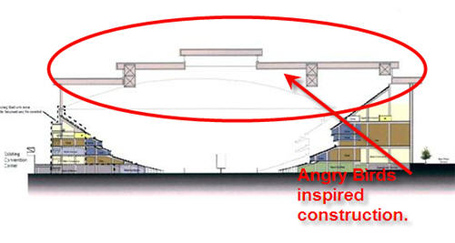 THE GOOD: I assume that the layout of the seats doesn’t change a significant amount. I also assume that some of the areas are going be converted into premium seating. But I suppose that this isn’t a bad thing if everything but the seats change. After all, the layout was never the problem with the EJD… It was pretty much everything else.

THE BAD: Are there faster beer stands? Because staffing 4 beer stands in the entire stadium with 8 volunteers looking to raise money for Little Suzy’s Dance Troupe wasn’t cutting it. Not only are we unable to get slammed and forget the horrors we’re witnessing on the field, but we can’t yell at the vendors for being slug slow because of their cute pink hats with Suzy’s picture on it.

In summary… I say BUILD IT!

Just make sure that Stan pays for all of it.