This Will Ferrell Picture Is The Kind Of Thing St. Louis Rams Fans Have To Get Excited About, Nowadays

St. Louis Rams fans have nothing left but the chance to see Will Ferrell wearing a helmet.

Share All sharing options for: This Will Ferrell Picture Is The Kind Of Thing St. Louis Rams Fans Have To Get Excited About, Nowadays

Used to be a St. Louis Rams fan could get excited about football by going to the Trans World Dome and watching Mike Martz attempt to run a play with nothing but wide receivers on the field. Then came Steve Spagnuolo and the Great Fun Purge of 2009, Or Thereabouts. Then came two-win seasons. Now Rams fans have this to get excited about: A picture of Will Ferrell wearing a Rams helmet while on tour promoting his movie The Campaign, about a comedian trying to find ways to use his George W. Bush impression again. (Via 3k at Turf Show Times.) 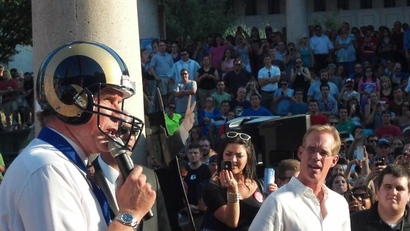 There you have it: This is what being a St. Louis Rams fan is all about in 2012. Liking this picture on Facebook, and then forgetting about the Rams connection and saying something about how attractive Jenna Fischer was in Blades of Glory, maybe? (Very attractive, although as a very, very white and boring human I prefer the unassuming Pam look.)

I'm as excited about Anchorman 2 as the next blogger, but (Dan, put in a joke here about Will Ferrell being better than the Rams other receivers after you get done watching Anchorman.) And we all know he'll be healthier than Danario Alexander, am I right? I'm right, and it's very sad, isn't it.