Sweaty Arms. Steven Jackson's private parts. An an introduction to the most dirty, despised team in sports. Oh, and Kenny Wallace thinks the St. Louis Rams are headed to the Playoffs.

That play? That fumble that put the Rams in a 0-7 hole after literally one play from scrimmage? That would have been enough to fo the 2005 to 2011 Rams to pretty much crawl in a hole and DIE. It'd be 24-0 before you knew it and another lost Sunday would be upon us all.

But the 2012 Rams? They've got an edge. Or at least a smidge of an collective apple-bag. And they ended up pulling off a damn good win at home.

Read that again. A WIN. For real. No jokes.

And was it just me or did Danny Amendola's arms look really sweaty after that fumble. Easy on the warm ups, Danny.

1. Uncle. It's time to bring the regular refs back.

Maybe the NFL stuck the shit crew in St. Louis... but WOW. What were they doing out there? It's as if they'd not only not refereed a game prior to today, but as if they weren't fully aware of what football was or how it was played.

I suppose it was a wash. That's the best we can say.

For every non-penalty called on Coach Fisher for throwing a challenge flag when he couldn't, there was a missed goal line call. It was like each flag was incepted by another flag that was much more obtuse. Oh, and while the coaches were having verbal aneurysms on the sidelines with the officials, a WWE Sunday Afternoon Raw broke out between the players.

If this crew were on a Dallas or New York game, the strike would have already been over. It would have been settled at halftime and Ed Hochuli would have came running out of the tunnel to Hell's Bells.

2. Know how you get pulled over and tell the cop you have diarrhea?

Or that you just got your period? The cop is all, "Oh, that's terrible, sorry for pulling you over, I'll rip up this ticket."

Or at least that's what we try, right?

NOOOOO... He wasn't benched. He had a groin strain. Don't believe me? Go ask him about his groin. What, you don't want to ask a 6'3" 240lb man about his high genital area? Then let's forget any of this ever happened.

Jackson pretty much never comes out of a game. And the Rams have SUUUUUCCCCKED his entire career. So one of the few games that's genuinely exciting, he's going to be in full pads on the sideline NOT wanting to get in there?

We might not get answers this week. But eventually the real story is coming out.

3. Oh man, that offensive line is going to be offensive in Chicago.

See what I did there?

I'm not sure they had a ticker tape parade in NYC when Wayne Hunter got traded to the Rams. But they might have. They HATED Wayne Hunter. Four weeks later, Rams fans are worried if he'll be able to go in Week 3. Because the LT options are pretty much him, you or your little brother.

Roger Saffold had his weekly escort by trainers off the field (a new tradition?!) and Hunter went down later in the game. Scott Wells had previously been ruled out for the next 4 weeks. And guys that were claimed off waivers last week were in the game during crunch time.

Not to go long on Debbie Downer after a win... but this is going to be a big problem if Hunter and Saffold can't get healthy quick.

4. That Bob Griffin guy is an electric little guy.

Hard to see this guy not getting Mike Holmgren fired before the end of this year. He's one of the rare ones that you don't want to have the ball. Ever. In fact, it'll be forgotten about, but the 60 yard bomb that hit Aldrick Robinson on the hands was fixin' to be the highlight of the week you got sick of seeing on SportsCenter.

But he dropped it.

And then the game tying/winning drive for the 'Skins was foiled by a stupid personal foul call. The Rams won the game, but the Redskins could have EASILY won that game too. RGIII didn't have his best stuff, but he still managed 3 TDs in a myriad of ways.

He stays healthy and he's a star in the making.

5. Danny Amendola wiped off his really sweaty arms and ended up with a record day.

15/160/1. That included 12 in the first half, tying Reggie Wayne for an NFL record. Maybe he should fumble the opening play more often? Hell of a game by #16.

I think we're all officially ready to stop thinking about that Season of Hard Knocks where he was fighting to make the Cowboys roster and now give him bona fides as a NFL starting receiver. Deal?

Do teams prepare for Cortland Finnegan and warn the players to not let him get in their heads? And by even suggesting that those players would be susceptible to Finnegan doing such, is he already in their head before he gets in their heads?

Welcome to the Jeff Fisher era, Rams fans. When opponents are leaving St. Louis and calling it the dirtiest game EVER... you know you've been STACHE'D.

Has Turtle had too much Avion? Was that second sentence genius or a typo? What the hell is going on whit this Tweet? 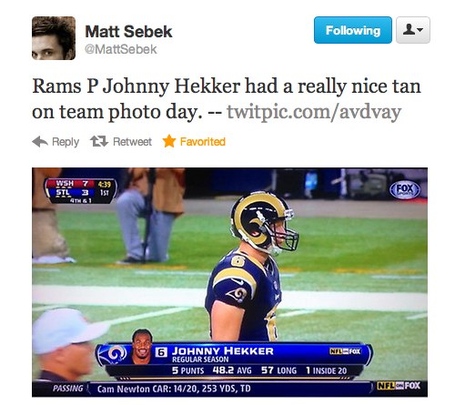 Real Meter: (Where we project the Rams win total for the year): 7